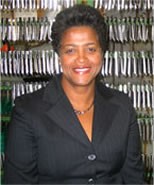 Biographical Note: Nancy Mercedes Zapata, a community advocate and business entrepreneur, was born in the Dominican Republic on June 24, 1961. She attended elementary and high school and received her diploma in liberal arts from El Consejo Nacional de Educación in the Dominican Republic on June 27, 1980.  When she moved to the United States after high school, she was employed as a Burger King cashier and as a hat trimmer in New York City. In 1981, Ms. Zapata was hired as a receptionist at Control Electropolishing located in Brooklyn, NY. She later became a full-time assistant to Mr. Morla at the Electropolishing Company while pursuing her college degree at Baruch College where she obtained a BA in Business Administration. After having worked as Mr. Morla’s assistant for 10 years, she became co-owner of the Electropolishing Company and the perfect candidate to continue running the business. When Morla retired, both he and his family sold the company to Zapata. Zapata was also very involved in helping her community and giving back to the neighborhood. She became president of the board of Saint Nicholas Neighborhood Preservation as well as a trustee of the Williamsburg Charter School. Over the years she has received several awards for her dedicated service and commitment to the community. Such awards include a recognition by The City New York Council for her voluntary service; the Millennium Woman of the Year Award by the Brooklyn Democrats; Community Service Award by the Bushwick United Democratic Club; and Rising Star Award by the Latino Job Service Employer Committee. As the president of Control Electropolishing Corporation, she continues to strive for success and remains involved in the affairs of her community.

Scope and Contents Note: The collection contains personal and professional documents, records, and other materials, such as papers, manuals, contracts, correspondence, notes and articles associated with Nancy M. Zapata’s professional work; and civic and social life from 1946-2013. The materials in her collection range from artifacts to documents, to legal documents and records, books and other publications. Most noteworthy artifacts in this collection include Zapata’s Proclamation award from The City Council of New York for outstanding service to the community and a certificate with the proclamation. There are records and documents of Zapata’s private and professional life.