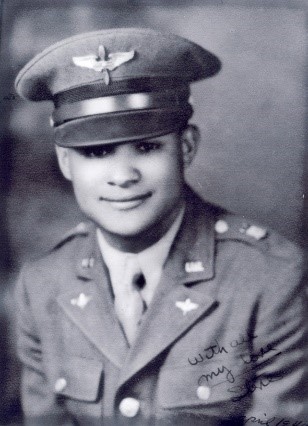 Biographical Note: Esteban Hostesse, also known as Stephen Hostesse, was born on February 11, 1919, in Moca, Santo Domingo, Dominican Republic. He came to the U.S. at the age of 4 with his mother, Clara Pacheco, who at the time was 25 years old and his younger sister Irma Hostesse, age 2. They moved to New York City, through the port of Ellis Island, on November 1, 1923. Hostesse joined the United States Army Air Forces on February 21, 1942, as an enlisted man and was promoted to Second Lieutenant. He was a member of the Tuskegee Airmen, the first all-black group of military pilots in the U.S. Armed Forces during World War II. He married Iristella Lind Hostesse a native of Puerto Plata, Dominican Republic. He applied for United Sates citizen on April 13, 1943. They had two daughters. Two of Hostesse's granddaughters, Iris Rivera and Frey West made a donation of archival photographs and documents, related to their family and the Tuskegee Airman to the CUNY Dominican Studies Institute Archives.       During World War II, Hostesse attained the rank of Second Lieutenant in the 619th Bombardment Squadron of the 477th Bombardment Group.

Although his group never got the chance to see combat, they fought in the U.S. for the same freedom their fellow service members were fighting for overseas. On April 11, 1945, Hostesse was among 101 black officers arrested for refusing to obey the Jim Crow system. His arrest took place after a series of incidents involving black officers challenging de facto segregeation by entering clubs reserved for white officers only and demanding service at the Freeman Army Airfield, a U.S. Army Air Forces base near Seymour, Indiana. In an attempt to enforce segregation, the base's white commanding officer, Col. Robert B. Selway, issued an order that classified all black officers as "trainees," which barred them from entering any facilities for white officers, and directed all officers to sign a statement verifying that they read, understood, and accepted the order. Hostesse, along with another 100 officers, refused to sign the statement, risking arrest, and potentially their lives, as disobeying orders from a superior officer during time of war is an act punishable by death. All 101 officers were arrested but later released following pressure from outside organizations. Col. Selway was later removed as commander and replaced with Col. Benjamin O. Davis Jr. Many historians see these events, which occurred 9 years before the Montgomery bus Boycott in which Martin Luther King and Rosa Parks participated, as a preamble to the Civil Rights Movement; they played a significant part in the decision made by President harry S. Truman in 1948 to desegregate the armed forces.

Hostesses’ life was cut short on July 8, 1945 after a B-25 aircraft he copiloted crashed during combat training while flying over the Ohio River near Madison, Indiana, killing two other Tuskegee Airmen officers on board.