< Home / The Division of Science / Chemistry and Biochemistry / Department History

The mission of the Department of Chemistry and Biochemistry, like the rest of the College, has traditionally been to provide high quality education to students from immigrant and low-income families and it continues to do so today. The public investment in human potential has paid off great dividends: four chemistry graduates went on to become Nobel prize winners and another twenty have become members of the National Academies of Science or Engineering.

Our name was officially changed in 2015, as we began conferring B.S. degrees in both Chemistry and Biochemistry.  We offer instruction and research experience to students at the undergraduate and graduate levels in all major areas of chemistry. The Department is accredited by the American Chemical Society and offers major concentrations in Chemistry and Biochemistry. The concentrations within the Chemistry major include standard chemistry and environmental chemistry. In conjunction with the School of Education, the department also offers an option in secondary school teaching. For more information on the bachelors, masters, B.S.-M.S., and doctoral programs, click here.

The Chemistry and Biochemistry Department looks to the future with great excitement. Our faculty ranks have been enriched in the past few years by many new hires who bring a new vitality to our research and teaching. Our students organize social and professional development activities through the undergraduate Baskerville Society and the graduate Science Alliance.  Complementing our home base for teaching and research in the Marshak Science Building, a new Center for Discovery and Innovation (CDI) research building opened on the South Campus in 2015, in close proximity to the CUNY Advanced Research Science Center, the New York Structural Biology Center, and the CCNY Dormitory. Together with the ongoing expansion of Columbia University into Manhattanville, these projects are making West Harlem’s City College of New York an internationally recognized center for research and education.​ 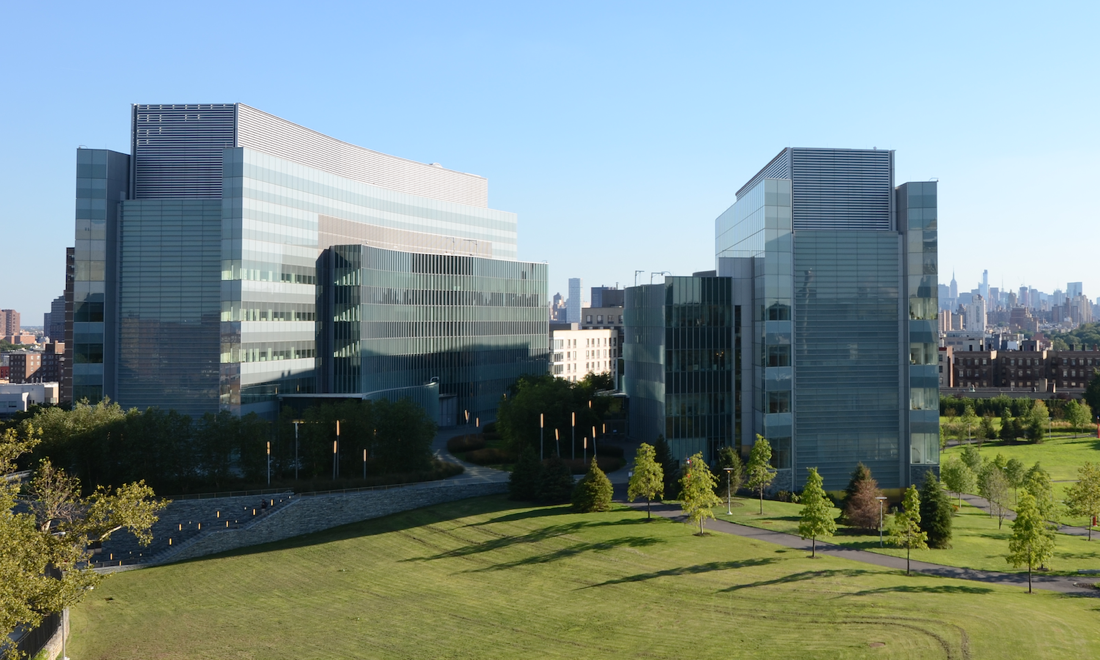 The ASRC (left) and the CDI (right)

Chemistry at City College has its roots as far back as the founding of the College itself, during the era of the New York Free Academy which preceded the City College of New York from 1847 to 1866. The first chair of chemistry (1848) was Professor Oliver Walcott Gibbs, a famous chemist of the time who later moved to Harvard. The second chair was Robert Ogden Doremus who was both chemist and physician, helping found two medical institutions in New York (University Hospital of Brooklyn and New York Medical College). Doremus was an expert on toxicology and disinfecting hospitals and public transportation. He even helped solve a murder case using his brand of 19th century forensic science. 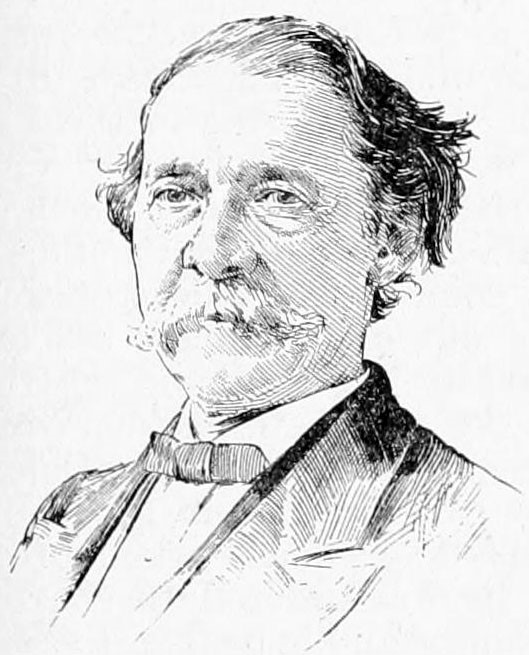 NYMC, New York Medical College, founded on the practice of understanding patient needs.  Robert Ogden Doremus was one of the founders.

Charles Baskerville was chair of the chemistry department from 1904-1922. Inspired by the work of Marie Curie and the earlier chemist, Jons Berzelius, Baskerville claimed the discovery of two elements which he called Carolinium and Berzelium. Although it proved to be incorrect, it was considered a valiant (not fraudulent!) effort to identify new radioactive elements at a time when the experimental techniques were nothing of what they are today. It earned Baskerville his place at City College. 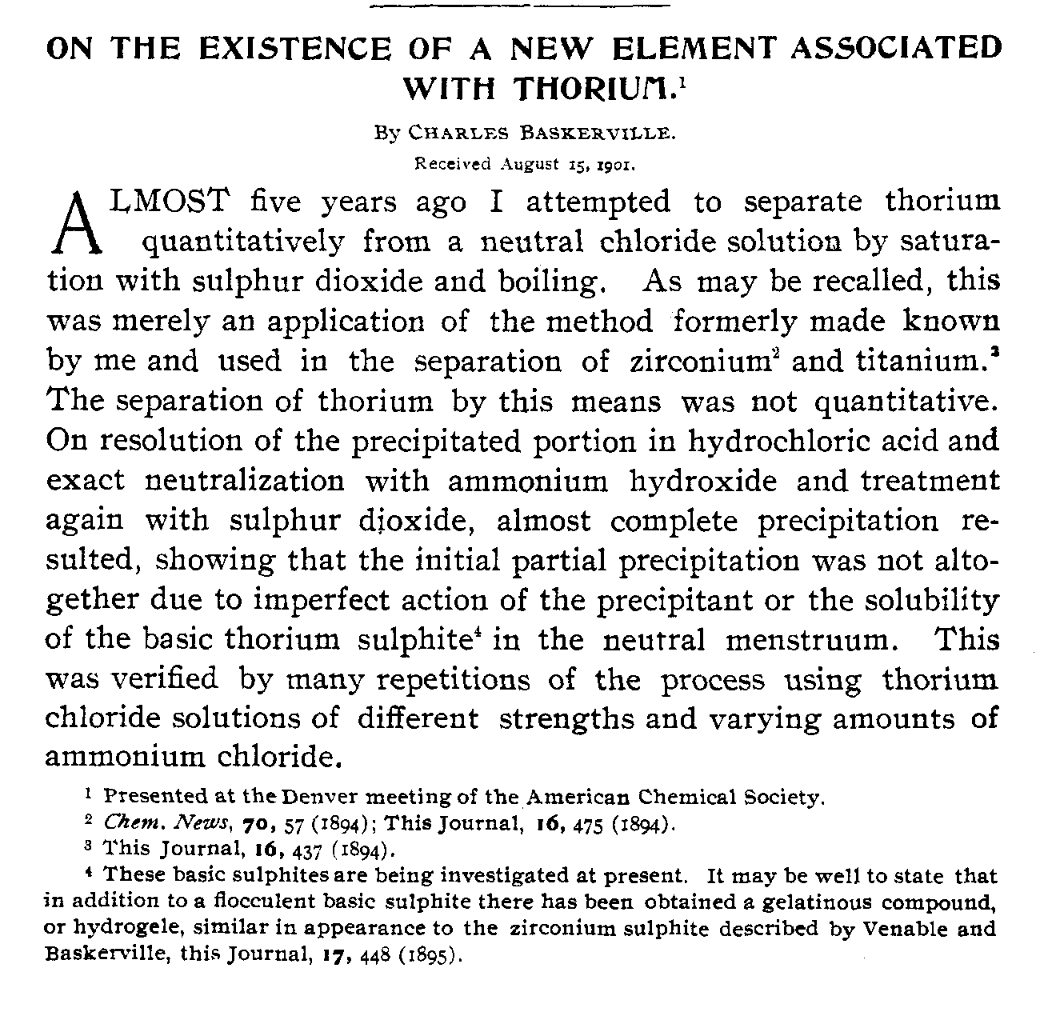 Baskerville’s original paper on the discovery of new elements derived from Thorium.

Baskerville was quite the powerhouse. He completely reorganized the department, added new laboratory facilities, and acted as a consultant to the city, state, and federal governments in such fields as wood alcohol regulation and school and factory ventilation. Among the first scientists to study seriously the problem of industry-related illnesses. A fellow (1898) of the American Association for the Advancement of Science, Baskerville served as secretary of its chemical section (1898), secretary of the association's council (1899), and vice-president and section secretary (1903). Six books and over two hundred scientific papers, journals such as Science and Review of Reviews. The Undergraduate organization for chemistry, The Baskerville Society, is named after him. 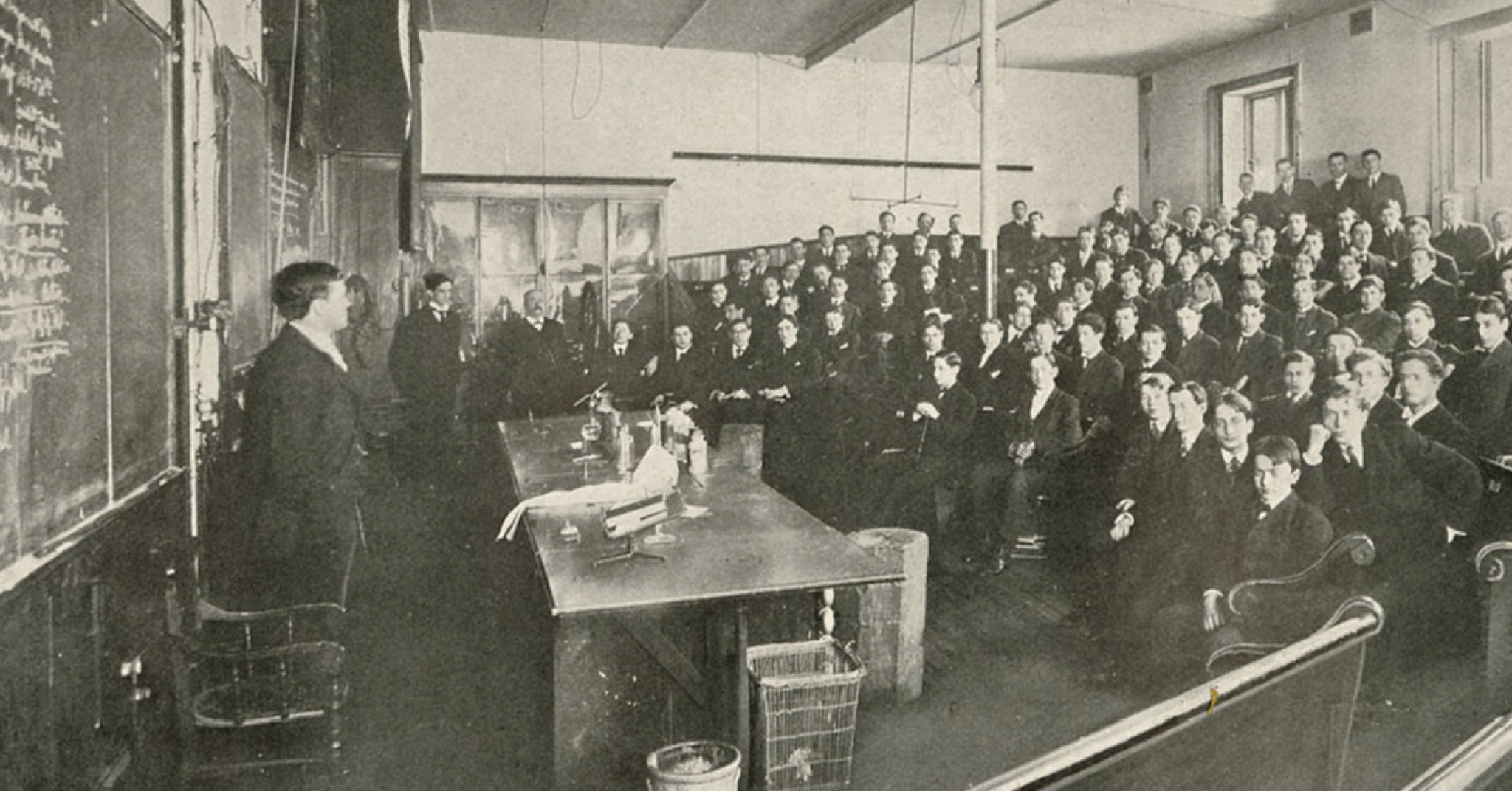 Baskerville giving a chemistry lecture at City College, around the turn of the last century.