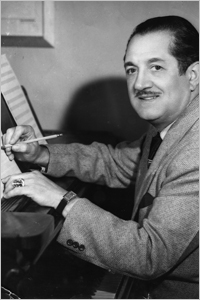 Rafael Petitón Guzmán was born in 1894 in Salcedo, a town in the central region of the Dominican Republic, but it was while living abroad that he firmly established his reputation as  one of his country's most important composers, conductors, and songwriters of popular Dominican music, especially the merengue and criollas.

Maestro Petitón settled in New York City in 1935 after traveling through numerous countries in Latin America, and formed Orquesta Lira Dominicana, the first Dominican-led band in  the city and one of the first to introduce and popularize the merengue in the city's ballrooms. The band's great success earned maestro Petitón the title "merengue ambassador."

Classically trained from an early age, he studied at Julliard School of Music under composer Leopold Stokowski and in Puerto Rico under Julio de Arteaga and Ramón Morlá. He  began his musical career as a pianist with the legendary Orquesta de Rafael Muñoz in Puerto Rico.

During his career in New York City, maestro Petitón performed in some of the most famous venues of the era including Radio City Music Hall, the Stork Club and the Copacabana,  but he focused his later years on teaching, musical arranging, and his own compositions. He died in 1983 in Puerto Rico but was interred, in accordance with his wishes, in his  beloved Salcedo.

The Rafael Petitón Guzmán collection consists of music scores, song lyrics, sound recordings, personal documents, photographs, and memorabilia. It was donated to the Dominican Archives in 2007 by his daughter Angelina McKenna, and sons John and James Petitón.