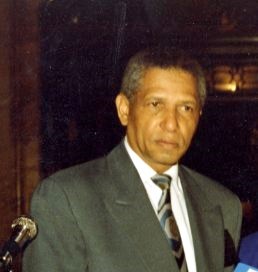 Biographical Note: Bienvenido Lara Flores was born on March 9th, 1939 in the Dominican Republic. He finished school at an older age due to financial problems He joined the Dominican Republic National Police and became a police officer. He migrated to the United States in??? and studied at the John F. Kennedy Special Warfare Center and School, Special Forces, in 1966; the International Police Academic in Washington, D.C, and the Carabineros de Chile. As a national police lieutenant, Lara Flores established the Police Academy in Hatillo, San Cristobal. From 1989 to 1996, Lara Flores was the Vice-Consul at the Dominican Republic Consulate of New York City, working in public relations and community organization. During his tenure as Vice-Consul, he was active in political and community affairs. He was a member of the political party Partido Reformista Social Cristiano. He was also a member and president of the Instituto Duartiano of New York which was originally organized as the Club Civico Cultural Juan Pablo Duarte, co-founded by Juan A. Paulino, Normandía, Marina Maldonado, Manuel Medrano and Victor Liriano. He was also involved with the Association of Macorisanos y Amigos; Club Deportivo 30 de Marzo; Club Hermanos de Altamira; Fundación Comunitaria Dominicana (Dominican Community Foundation); Logia Masónica PROGRESO 25

Scope and Contents Note: The materials in this collection are based mostly on Bienvenido Lara Flores’s work within the Dominican community, politically and socially. There are some documents related to his personal life, such as certificates and personal correspondence. Other documents are related to his political and social life, which includes correspondence and notes from the Partido Reformista Social Cristiano organization and Instituto Duartiano. The biggest series in his collection consists of photographs, which are records of his work within the community. Some photographs document social events, such as dinners, parades, and meetings, while others are personal photographs. The subject files include different newspapers and newspaper manuscripts, and are arranged alphabetically by subject.