A Historic Cohort of Summer Interns

In addition to pursuing their own research interest, interns participate directly in CUNY DSI’s ongoing research projects, providing them with hands-on experiences while simultaneously injecting the perspectives of young minds into the Institute’s research design.

From time to time, younger students participate in the Summer Internship Program at CUNY DSI. For instance, this year’s summer cohort included an eighth and an eleventh grade student. Exceptional in their own right, these youngsters were subjected to the same academic rigor expected from the college students.

This summer we were joined by a wonderful team composed of:

This year’s interns worked on the housing research project currently underway at CUNY DSI. The study on housing has resulted in two published monographs detailing the impact of gentrification among Dominicans residing in the legendary neighborhood of Washington Heights/Inwood. These publications earned CUNY DSI considerable media attention, and became regularly talked about among stakeholders.

The summer interns were tasked with capturing and describing the physical transformation of Washington Heights/Inwood through ethnographic research. The idea was for students to expand the housing research, which, up to that point, had relied only on statistical data and secondary sources. Interns were to track the transformation through participant observation of the neighborhood, collection of visual sources, and historical analysis. Dr. Yana Kucheva, an affiliate faculty of the CUNY DSI and an assistant professor of Sociology at the Colin Powell School at The City College of New York, and Sarah Marrara, CUNY DSI’s statistician and data manager, along with the CUNY DSI Director, designed the methodology for the ethnographic research.

The first step in the summer research project’s methodology was for interns to learn about the Dominican Republic, the history of Dominican migration to the U.S., particularly to New York, and about the settlement of Dominicans in Washington Heights/Inwood. They read a bibliography selected by CUNY DSI Chief Librarian, Prof. Sarah Aponte.

They also worked with various databases and archival collections to deepen their historical understanding of Washington Heights/Inwood in the 1990s. They consulted the Coleman Business Directory, housed at the New York Public Library, and the New York City Department of Planning’s online Zoning and Land Use Map database which Nicholas Almonte utilized to prepare a spreadsheet identifying property ownership in the neighborhood. They also reviewed collections of Dominican community activists housed at the CUNY DSI Archives to achieve a better understanding of the social and cultural atmosphere of Washington Heights in the 1990s.

For the participant observation portion of the research project, interns were placed in pairs, and each pair was assigned to a twenty-block stretch along Broadway, a walk that was once filled with an abundant number of Dominican establishments and cultural representations. The interns walked along their assigned blocks for a week, taking copious notes along the way.

The young researchers had debriefing sessions with the CUNY DSI director regularly, to interpret what they had seen on their walks, to compare what appeared to be new, as per the literature review, and to make conjectures of what they thought the future might look like. During the debriefing sessions, interns shared their experiences in the field, often expressing how taken they were with the way the neighborhood’s physical structure has changed, particularly how businesses that once had names that alluded to Dominican culture or history, were now replaced by commercial franchises. The transformations in the neighborhood reflected changing tastes, new products, and new services. Yet, the interns were also surprised by the resilience of Dominican cultural practices and their appropriation of public spaces to maintain cultural traditions. In particular, Nicholas Almonte and Lydia Robles were amazed to discover a “conuco,” or a quasi-informal vegetable plot, located on a square of a street corner, almost at the northernmost end of Washington Heights, carefully and caringly maintained by Dominicans who lived nearby. The finding provoked numerous conversations about resilience and its limitations.

Elizabeth Castillo and Sophia Di Giorgio undertook the task of compiling individual observations and analyses into a group paper. Alexandra Hernandez was teamed with Sophia to review specific readings and prepare notes. Using information collected by Mariela Pichardo and Nicholas Almonte, Zoë Crutcher employed Google Maps software to produce an interactive map indicating changes to buildings in the targeted area between 1990 and the present. Rianna Davis, from the University of Cambridge, worked on the latter part of the research. She worked alongside Sophia on the delicate task of editing the final paper prepared by the group.

It is always a challenge to think ahead about how these interns will be marked by their experience at CUNY DSI. That knowledge is reserved for the future. Today, however, we know that they have already started to make use of the research skills learned at CUNY DSI in their classes. We are also sure that each one has deepened their appreciation for the enduring strength of the Dominican people as they face the vicissitudes of building a life of their own here and there.

CUNY DSI benefited from students’ participation in the life of the Institute and from their research. They created a road map that shows the neighborhood that Washington Heights/Inwood once was and the one it has become today. Their labor in the field and their analytical insights decisively enriched CUNY DSI’s statistical research on gentrification in a neighborhood whose name is forever associated with the history of the Dominican people in New York City. 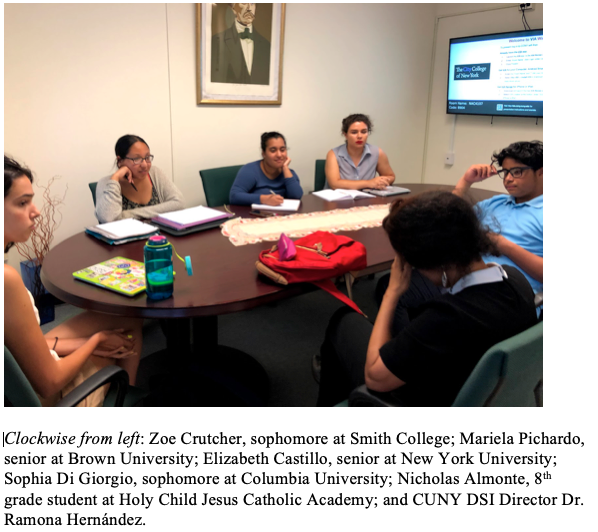 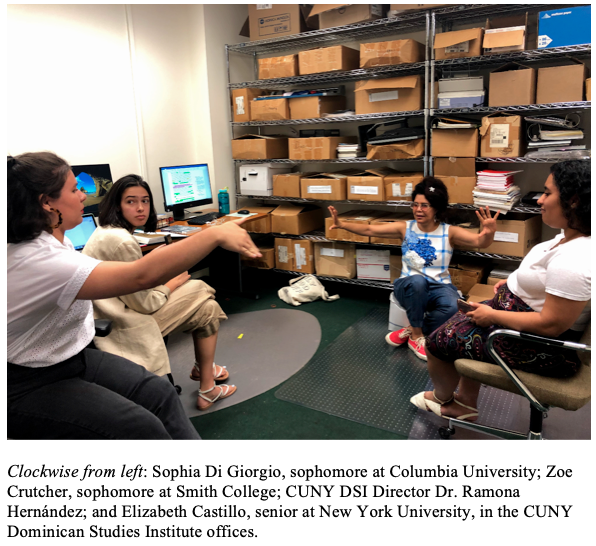