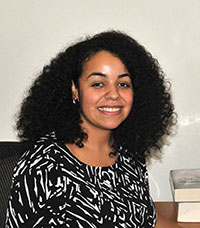 We are thrilled to announce that this fall, Dr. Sandy Plácido joined the CUNY Dominican Studies Institute as the inaugural CUNY DSI/Queens College Dominican Studies Scholar. In this position, which she will hold for three years, Dr. Plácido will split her time between working as a research scholar at the Institute, and as a tenure track assistant professor in the History Department at Queens College. At the CUNY DSI, Dr. Plácido will focus on innovative research covering Dominican women’s history, as well as Spanish Caribbean intellectual traditions and activism, both in the sending/ancestral lands and in the U.S. Her teaching at Queens College will focus on similar topics. Dr. Plácido received a B.A. from Yale University in 2008 and a Ph.D. in American Studies from Harvard University in 2017.

Dr. Plácido is currently working with Dr. Ramona Hernández, and renowned Dominican Republic-based scholar Dr. Diógenes Céspedes, on a book about women who shaped Dominican society from the 1820s to the present. In the spring of 2019, she will teach a course titled, “Activist-Intellectuals of the Spanish Caribbean.”

“In the last two and a half months, I have been reinvigorated by the cutting-edge research and collaborative practices of the CUNY DSI. And I am looking forward to teaching at Queens College next semester, where I will be working with dedicated students and colleagues in a city that has fundamentally shaped my worldview” Dr. Plácido said.

Dr. Plácido is a proud member of New York City’s Dominican/Latino community. Her parents were part of the wave of Dominican migrants who settled in New York City in the post-1965 period. Her mother worked as a seamstress and her father as a cab driver.  They later ran an auto repair shop in the Bronx, where her mother, doña Mireya Henríquez, worked as a mechanic alongside Dr. Plácido’s father, don Hugo Plácido.

“So much of my intellectual trajectory can be traced to my desire to construct and understand the narrative of my parents’ lives,” said Dr. Plácido.

This curiosity led her to pursue research into Dominican migration, feminism, and community organizing as an undergraduate at Yale University. One of the very first places she visited as she embarked on her academic journey was the CUNY DSI, where CUNY DSI’s Director Dr. Hernández, and Chief Librarian Prof. Sarah Aponte, became two of her earliest mentors on this path.

Dr. Plácido’s research on the effect of deportations on Dominican transnationalism put her into contact with activists in Washington Heights, and after graduating from Yale, she returned to the Dominican community, and joined the Northern Manhattan Coalition for Immigrant Rights as an anti-deportation organizer.

Dr. Plácido applied to graduate school with the intention of writing about the history and politics of immigration enforcement in the Dominican community, but after making several surprising archival discoveries, she decided to write the first, in-depth study of Dr. Ana Livia Cordero, a Puerto Rican physician and radical activist. Dr. Plácido’s book manuscript based on this work will highlight Puerto Rico’s role in Cold-War era liberation struggles. Dr. Plácido’s research on Puerto Ricans will help expand one of CUNY DSI’s current projects focusing on the historical relationships between Dominicans and Puerto Ricans, a severely understudied topic.

“It is an honor and pleasure to work with the brilliant team at the CUNY DSI. The Institute should serve as a model for how to collectively produce and widely disseminate scholarship. My goal during my time at the Institute is to carefully construct and interpret  historical narratives that will more accurately reveal the contributions and complexities of the Dominican people,” Dr. Plácido explained