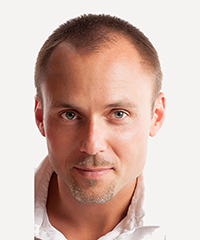 Martin Nekola is an independent scholar and Research Director at Democracy 2.1. His research has mostly focused on non-democratic regimes, the era of Communism, and the East-European anti-communist exiles in the United States during the Cold War. The focus of his most recent research has followed the stories of political refugees from Eastern Europe in the aftermath of the Second World War and their migration to various parts of the globe, including the Dominican Republic. Earlier in 2016, Dr. Nekola conducted research on this topic at the Hoover Institution and Stanford University. In the first half of October 2016, he continued his research at the CUNY Dominican Studies Institute, where he was a recipient of a 2016 Dominican Archives & Library Research Grant. During his time in New York, Dr. Nekola also explored the resources available at the Manuscripts and Archives Division of the New York Public Library, and visited numerous other archives.

“Since my topic isn´t well known, I expected from the beginning of my research that I would need to go through materials stored at various locations in New York City,” Dr. Nekola explained in summing up his use of the grant. “I found many references to the migration to the Dominican Republic in the period I am interested in. Also, I made copies of a vital source: Dominican statistical data yearbooks between 1946-1965. Thanks to these overviews, I know the exact numbers of immigrants to the Dominican Republic by nationality now. I came across similar statistical data, charts and tables in the United Nations Archives and Record Management as well. I made another important research stop in the archive of YIVO Institute for Jewish Research where life stories of Jewish migrants to the Dominican Republic are to be found.”

Dr. Nekola found that this time spent in New York’s archives advanced his research aims considerably: based on the sources he consulted, “we are able to track the exact numbers of Czech, Polish, Hungarian, Yugoslav or Romanian refugees living for some time in the Dominican Republic, the annual ratio of the incomers (llegados) and ones who moved elsewhere (salidos) divided by the country of origin, their profession, education, economical and family background, the region of the Dominican Republic where they lived and other important data enabling us to detect the whole framework of the East-European settlement in that period. As mentioned, it has never been thoroughly investigated by European historians. That is one of the reasons I consider more extensive research on this topic important, necessary, and unique.” He hopes to share further findings with the Institute, in an ongoing relationship of reciprocity, and has some specific proposals for doing so: “I am eager to share all my findings with CUNY DSI. I would suggest the creation of an online depository or storage as part of the Institute webpage, where registered users (students, fellows, experts on Dominican studies worldwide, and others) may upload various files and folders, with appropriate categorization and descriptions, of course, related to the topics of CUNY DSI´s interest. This may help to build a research community and to achieve a comprehensive examination of hitherto overlooked topics.”