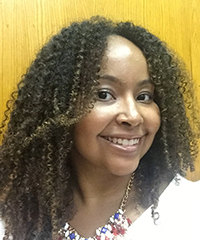 Omaris Z. Zamora, currently a Visiting Assistant Professor in the Africana Studies Program at Lehigh University, defended her PhD in Iberian and Latin American Literatures and Cultures at the University of Texas at Austin in late summer 2016. In June of 2016, Dr. Zamora completed a two-week research visit at CUNY DSI as a recipient of the CUNY Dominican Archives and Library Research Grant. As part of the process of developing her dissertation, (Trance) formations of an Afro-Latina: Embodied Archives of Blackness and Womanhood in Dominican Transnational Narratives, into a book, Dr. Zamora devised an ethnographic research plan: to conduct an oral/narrative history with first and second-generation Dominican women living in the United States. “The idea,” she wrote in presenting her plan to CUNY DSI, “is to capture how these women understand themselves in the context of blackness, but more so, how they understand their bodies inform their identities and subjectivities. In other words, I am interested in the ways that gender, sexuality, race, and class are read and understood through the presence of the body.”

Dr. Zamora’s preliminary research at the CUNY Dominican Archives and Library focused on Dominican diaspora women’s narratives and experiences with the following questions: What are they saying? How is their story or narrative being presented? What is the angle, bias, or objective with which it is being presented? Finally, how are their bodies informing their experiences? In going through the online DSI catalog, she found, as she had expected to, that the word “feminism” was not used very much among immigrant Dominican women. “From prior research experience at the Biblioteca Nacional in Santo Domingo,” Dr. Zamora noted afterward, “it seems that feminism as a concept has been predominantly more comfortably and discursively used by light skin or white middle to high-class Dominican women. It would be interesting to look at why that is, and how is the diaspora currently changing that.”

Dr. Zamora’s research also led her in some new directions: “my time at the Institute also pushed me to think about anti-Trujillista groups in Chicago like the Dominican Liberation Movement, and the Washington Heights riots of Summer 1992 and the involvement of Mujeres en Contra de la Violencia.” Given that the organization was formed in 1989 in response to police brutality, Dr. Zamora thought it would be important and interesting to bring this into the conversation on today's Black Lives Matter movement. She also suggested that CUNY DSI could initiate an oral history project to collect the histories of Afro-Dominican activist movements.

She was grateful for the experience of doing research at the CUNY Dominican Archives and Library and praised it as an institution with strong connections to the world outside academia. “I commend the Institute on the visibility and recognition it has had among scholars, but also in the community. I believe that the current programs and activities have been successful in attempting to close the gap between theory and practice—or academia and the community. Lastly, I want to thank your personnel who are so hospitable, organized, and an amazing team to have.”