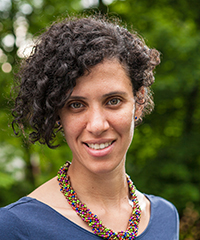 Sharina Maillo-Pozo is an Assistant Professor in the Department of Languages, Literatures & Culture at SUNY New Paltz and one of the Dominican Studies Institute’s three 2016 NSA Fellows. She holds a PhD from the CUNY Graduate Center in Hispanic and Luso-Brazilian Literatures and Languages, and her scholarly interests include the relationship between literature and popular music, gender studies, and performance studies in three closely related fields: Latin American & Caribbean Studies, Latino/a Studies, and Dominican Studies.

Dr. Maillo-Pozo is currently conducting original archival research on the cultural dynamics of Dominican intellectuals during the late 19th and early 20th century. Specifically, her current project will recover the intellectual legacy of Camila Henríquez Ureña, a central but heretofore overlooked intellectual and educator from the Dominican Republic. It is a project that Dr. Maillo-Pozo feels requires an interdisciplinary approach, one which she is able to bring, thanks to her extensive experience with scholarly and archival research, her understanding of a variety of contemporary theoretical perspectives, and her own experience as a first-generation immigrant and Dominican scholar. Dr. Maillo-Pozo’s research will show that Camila Henríquez Ureña is central to the intellectual history of women within the field of Latin American, Latino/a, Caribbean, and Dominican Studies: from Camila’s foundational doctoral thesis on Eugenio María de Hostos, a priceless legacy of antillanista pedagogical thinking, to the vast and erudite body of literary criticism and essays she produced in her lifetime. Dr. Maillo-Pozo will be tracing Henríquez Ureña’s contribution to Spanish-speaking Caribbean and Latina Feminisms. She also hopes to establish her as a central figure within the field of contemporary gender studies. To this end, she will be looking at Camila Henríquez Ureña’s impact on women’s studies while she served as a professor at Vassar College (1942-1958), during which time the institution was solely for females, as well as her writings and correspondence throughout her career.

At the Dominican Library, Dr. Maillo-Pozo looked at correspondence between Henríquez Ureña and her family members, and making use of the Dominican Feminism collection at the library. Both Chief Librarian Sarah Aponte and Archivist Jessy Pérez helped her to track important documents, and have also provided archival assistance with some of her previous research projects. Dr. Maillo-Pozo noted that during the course of her research at the Dominican Library, Prof. Aponte directed her to a book about the Instituto de Señoritas founded by Salomé Ureña de Henríquez, Camila’s mother, in the Dominican Republic. This kind of background knowledge has proved instrumental in helping Dr. Maillo-Pozo to situate Camila Henríquez Ureña within the history of her family members and their own intellectual endeavours.