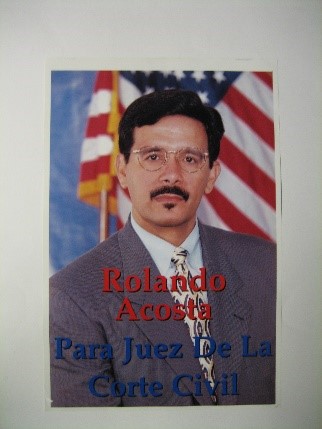 Biographical Note: Rolando T. Acosta was born in Santiago, Dominican Republic. He came to New York at the age of 14 and soon made his presence known, pitching DeWitt Clinton High School to a city championship, earning all-city honors as a soccer goalie, and graduating fourth in a class of over 1,000 students. He received a Bachelor of Arts from Columbia College in 1979 and a Juris Doctor from Columbia University School of Law in 1982. Upon graduation, he worked as a staff attorney for the Legal Aid Society. Rolando T. Acosta is the first Dominican immigrant to be elected Justice of the Supreme Court of New York County (2003-2008) and was later appointed to the Appellate Division, First Department. Prior to his election to the Supreme Court, he was appointed Acting Supreme Court Justice by Chief Administrative Judge Jonathan Lippman (2001-2002) and Judge of the New York City Civil Court (1997-2002). Judge Acosta was active in the development of the Washington Heights/Inwood social service infrastructure. He helped found the Community Association of Progressive Dominicans and the Latino Commission on AIDS. Acosta served as legal adviser to the founding board of Alianza Dominicana, as treasurer and chair of the Policy Committee of the Hispanic Federation, as member of Community Planning Board 12, and as president of Community School Board 6. He served as officer and founding board member for Upper Manhattan Empowerment Zone Corporation; on the Executive Committee and as chair of the Human Capital Development Committee (1995-1999); as Legal Aid Society Director of Government Civil Practice (1995-1997); and civil attorney in charge of the Brooklyn Legal Aid Society from 1994 to 1995. He has also been active in various other Latino-and immigrant-oriented legal and community organizations and served as first deputy commissioner and deputy commissioner of the New York City Commission on Human Rights, 1990-1993.

Scope and Contents Note: The bulk of the collection consists of correspondence, newspaper clippings, photographs, albums, and other materials generated by Judge Rolando T. Acosta. They document Acosta’s professional and community activities as well as his four years as a pitcher for Columbia University. There are also posters and flyers from his successful 2002 campaign for the Supreme Court of New York County, a videotaped 1991 television interview, and a DVD of Acosta appearing with school children in which he attempts to motivate students to aim high.