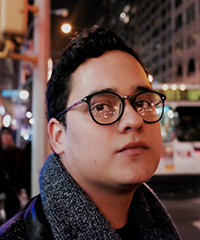 Wilfredo J. Burgos Matos is a doctoral student in the Hispanic and Luso-Brazilian Literatures and Languages Department at the CUNY Graduate Center. He holds a BA in Hispanic Studies from the University of Puerto Rico-Mayagüez and an MA in Communications-Journalism from the University of Puerto Rico- Rio Piedras. At CUNY, he has been studying Caribbean music, and his current project will be one of the first studies in the department to approach music as its main object of research rather than as a means of entry onto literature, film, and other forms of media. In addition to his work as an ethnomusicologist, Wilfredo is also a journalist and a musician, and began singing and playing guitar while growing up in Puerto Rico. Burgos Matos says that he has always been struck by the powerful role music plays in reshaping the political and social imaginary of what it means to be from the Caribbean.

Wilfredo has undergraduate training in a diverse set of disciplines, each of which provides a useful vantage point on his current research. As an undergraduate, Wilfredo focused on Dominican Literature after Trujillo, and he also holds an MA in Communications, for which he researched Dominican radio stations in Puerto Rico. The latter project marked his entry into ethnography, as he began analyzing these radio stations to see how Dominican music served as a transnational marker of Dominican identity. Eventually, Burgos Matos found the radio station to be limiting as an organizing concept, and that he wanted a more specific, grounded ethnography of popular Dominican musical traditions in Puerto Rico. For this research, he began to study the Dominican music scene in Puerto Rico, and began doing fieldwork in popular dance venues around which the Dominican music scene in Puerto Rico had coalesced. The resulting ethnographic study was presented in Puerto Rico, the U.S., and Haiti. Burgos Matos has stated that he is interested in a cultural and historical moments in which bachata is produced “in place of action.”

At the same time, Burgos Matos is interested in bachata as a cultural terrain on which the uneasy coexistence of Puerto Rican-ness and Dominican-ness are negotiated. He hopes that his work can contribute to a movement within Puerto Rico to be more open to and aware of important Dominican contributions to the regional culture. He hopes that future studies continue to develop a new field of conversation on bachata, and to give the musical genre the scholarly attention it richly deserves.

At the CUNY Dominican Library, Burgos Matos has been researching the cultural history of the Dominican American community in Washington Heights as a major center of Dominican cultural production. He is complementing his archival research in the library with an ethnographic study of the Dominican bachata music scene in NYC, where he will specifically be focusing on bodegas and other everyday sites of musical performance among Dominican men.