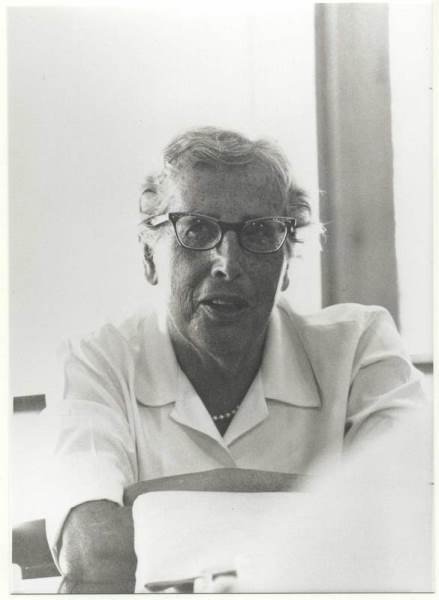 First female faculty member at the City College of New York… First female department chair… First woman to head any engineering department anywhere in the United States… and a life-long mentor and champion of women in STEM. Cecile Froehlich did it all.

Born to a Jewish family in 1900 in Cologne, Germany, Cecile Froehlich (nee Cäcilie Fröhlich) studied mathematics, physics and philosophy at university, receiving her doctorate in mathematics from the University of Bonn in 1926. After a brief career as a teacher, she took a new position in the electrical engineering industry – a career move rare even among men with doctorates in mathematics, let alone women.

Forced to emigrate from Nazi Germany in 1937 and already famous for her work dealing with losses due to eddy currents, Froehlich worked briefly in Belgium. However, when the German army invaded Belgium in 1940, she was once again in danger. She fled to France, then Portugal, and after harrowing experiences, to the United States in 1941.

Froehlich became one of the first female members of the American Institute of Electrical Engineers (AIEE), founded in 1884 to promote the arts and sciences associated with the production and utilization of electricity and the welfare of those employed in these industries. Froehlich recalled her first experiences with AIEE: “When I was finally accepted, they sent me a letter which said that the main advantage of being a member was that from now on I could have close and frequent relationships with fellow members. Apparently, they didn’t know I was a woman.”

Froehlich later became a senior and lifetime member of the Institute of Electrical and Electronics Engineers (IEEE).  In 1952, she was inducted as “a brother” into Eta Kappa Nu, an electrical engineering fraternity. This fraternity, which is essentially an honors society for electrical and computer engineering, was founded in 1904 and is now affiliated with IEEE. On May 6, 1961, the Eta Kappa Nu Award went to Cecile Froehlich “for her outstanding service and development to the City College and its students” as the first woman to chair a department of electrical engineering in the United States.

Tau Beta Pi, another male-dominated honors society, did not exactly award Froehlich with full membership, but rather with a woman’s badge.  At that time there were approximately 4,000 members in the Society of Women Engineers, and approximately 400,000 male engineers in the United States as a whole.  Froehlich also belonged to the American Society for Engineering Education, the Society for Industrial and Applied Mathematics, and the American Association of University Women.