< Home / The Grove School of Engineering / About Andy Grove 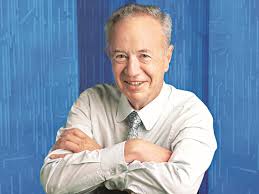 “We will continually find new things for microchips to do that were scarcely imaginable a year or two earlier.”

Born András Gróf in Budapest into a Jewish household on September 2, 1936. His father owned a small dairy business, and his mother helped keep the books. His father was rounded up by German troops occupying Hungary during World War II and sent to a labor camp, where he survived typhoid and pneumonia. The young Andy was hidden by a Christian family until the war’s end.

Andy Grove left his homeland in 1956 during the Hungarian Revolution. By the time he was twenty, Grove writes in his autobiography he had lived through a “Fascist dictatorship, German military occupation, the Nazis’ ‘Final Solution,’ the siege of Budapest by the Soviet Red Army … and a popular uprising that was put down by gunpoint. …The revolt lasted for thirteen days and was then put down by Soviet armed forces. Many young people were killed; countless others were interned. Some two hundred thousand Hungarians escaped to the West.

This theme of tenacity and singular achievement is captured in the title of Grove’s autobiography, Swimming Across.  His physics teacher would tell parents that life was like a lake and that all of their children were trying to swim across. “Not all of them will swim across. But one of them, I’m sure, will. That one is Grof.”

Speaking little English, Andy Grove made his way to America in 1957 and enrolled in City College.  In spite of a hearing impairment that forced him to learn to read lips and decipher his notes at home or at the library with a dictionary at his side, he graduated at the top of his class with a degree in chemical engineering in 1960. Three years later, he received his Ph.D. at Berkeley.
After working at Fairchild Semiconductor as first a researcher and then assistant director of development, he joined Robert Norse and Gordon Moore in 1968 and together they founded Intel Corporation, which has grown to become the world's second largest and second highest valued semiconductor chip maker. It invented the x86 series of microprocessors, the processors found in most personal computers. In this role, Andrew Grove has been pivotal in the development and popularization of the 20th Century's most remarkable innovation: personal computing. The technologies pioneered by Grove and his associates, first at Fairchild Semiconductor and then at Intel, made the entire personal computing revolution possible; they have proved also essential for digital cameras, consumer electronic products, household appliances – anything that depended on computerized function.

Before Grove’s retirement in 2005, he served as Intel’s COO, CEO and Chairman of the Board.  Several times during his long involvement with Intel, the Silicon Valley giant courted disaster. The causes ranged from unexpectedly tough competition to faulty Intel products to poor management decisions. But Intel rebounded stronger from each episode, thanks largely to Mr. Grove’s ability to recognize the gravity of a crisis and set a new course. “There are waves and then there’s a tsunami,” he wrote in Only the Paranoid Survive. “When a change in how some element of one’s business is conducted becomes an order of magnitude larger than what that business is accustomed to, then all bets are off.”

Grove’s management ideas helped make Intel one of the most profitable companies in the world, with an average annual return of more than 40 percent for its shareholders from the late 1980s to the turn of the century. His work ethic, his personal drive and his notion of the value of “creative confrontation” became the managerial model for generations of Silicon Valley entrepreneurs.
More than any other person, Andy Grove has made real the defining law of the digital age: the prediction by his friend and Intel co-founder Gordon Moore that microchips would double in power and halve in price every 18 months or so. And to that law, Grove has added his own: “we will continually find new things for microchips to do that were scarcely imaginable a year or two earlier.”