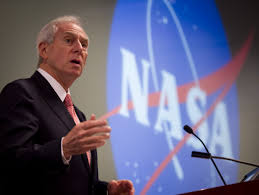 "One thing I am sure of, though, is that T.S. Eliot was right when he said: ‘Only those who will risk going too far can possibly find out how far one can go.’ At NASA, we can't wait. "
Daniel Goldin, NASA Administrator, Keynote Address to BIO’99

During his tenure as NASA's longest-serving Administrator, Daniel S. Goldin initiated a revolution to transform America's aeronautics and space program. Despite lower budgets, his "faster, better, cheaper" approach has enabled the Agency to deliver programs of high value to the American public without sacrificing safety.

Immediately after receiving his Bachelor of Science in Mechanical Engineering from CCNY Goldin began his career at NASA's Lewis Research Center in Cleveland, working on electric propulsion systems for human interplanetary travel.  For 25 years, he rose through the ranks of TRW Space and Technology Group – where he led projects for America's defense and conceptualized and managed production of advanced communication spacecraft, space technologies and scientific instruments.  Thirty years after he left City College, Daniel Goldin became the 9th Administrator of the National Aeronautic and Space Administration – serving under three U.S presidents.

When Goldin took the reins at NASA, many critics of the Agency thought of it as a bloated bureaucracy pursuing missions that were too expensive, took too long to develop and flew too infrequently.

Through Goldin's aggressive management reforms, annual budgets were reduced, by approximately $40 billion from prior budget plans. He implemented a more balanced aeronautics and space program by reducing human space flight funding from 48 percent of NASA's total budget to 38 percent and increasing funding for science and aerospace technology from 31 to 43 percent. In presenting Goldin with the 1998 Laurel Award for outstanding achievement in aviation and aerospace, Aviation Week & Space Technology magazine said he has "delivered on his promise to reshape NASA into a model government agency."

During his tenure, the Agency's civil service workforce was greatly reduced, without resorting to forced layoffs. At the same time, NASA's productivity gains climbed 40 percent. Goldin cut the time required to develop Earth and space-science spacecraft by 40 percent and reduced the cost by two-thirds, while increasing the average number of missions launched per year by a factor of four. During the same time, Space Shuttle costs were reduced by about a third, while all safety indicators and mission capabilities have achieved significant improvements.

The New York Times reported that space analysts attribute the new era of revitalization at NASA "to the influence of Dan Goldin . . . (who) in 1992 started a vigorous campaign to make the agency's products smaller, cheaper, faster, and better. He is still pushing that agenda hard." Under his leadership, the Earth Science program was refocused to fly more spacecraft and collect more measurements for half the cost of what had been planned in 1992. Defense Business, which named Goldin among the world's top 40 most influential defense-industry leaders, said he "has tightened the workforce, introduced a stunning array of new missions, including information-gathering journeys to the Moon and Mars, and become the major player in the origins of the International Space Station.

Nowhere was Goldin's vision more evident than in his comprehensive strategy for space exploration. He initiated the Origins Program to understand how the Universe evolved, to learn how life began on Earth and to see if life exists elsewhere. He led a rescue plan for the successful installation of a "contact lens" on the Hubble Space Telescope, leading to startling discoveries of the cosmos, and was a vigorous proponent for increased exploration of human missions to Mars.

To expand opportunities for public and educational participation in the adventure of space exploration and research, Goldin directed NASA's program managers to incorporate Internet access into mission outreach plans. This new policy attracted over three-quarters of a billion "hits" for the Mars Pathfinder mission, while CNN reported an unprecedented half million hits per minute during its Webcast of STS-95, the mission which included John Glenn's return to flight. Small wonder that when it named him one of the 100 most influential men and women in government, the National Journal observed that "most space watchers say that Goldin is a brilliant visionary who brought NASA back from the brink of a black hole."