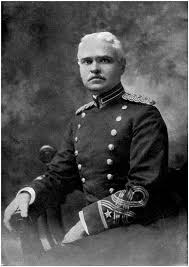 He Joined Two Oceans, and Revolutionized Travel and Trade

The most famous engineer coming from CCNY during its the early years was George Washington Goethals. Born in Brooklyn, New York, on June 29, 1858, the son of Flemish immigrants John and Marie Baron Goethals, he entered the College of the City of New York at age 14 to study civil engineering, and after three years won an appointment to the United States Military Academy at West Point, graduating second in his class. In 1880 he was commissioned as second lieutenant in the Army Corp of Engineers.

The name Goethals will be recorded in history as the man who accomplished one of the greatest feats of engineering and construction since the Egyptians completed the mighty pyramids - the construction of the Panama Canal. With its opening in 1914 it revolutionized trade and travel from the Atlantic to the Pacific – and it stands today as a monument to humankind’s ingenuity and indomitable spirit.

George Goethals was no stranger to public service. During the Spanish-American War Goethals served as Chief of Engineers in the Volunteer Army, with the rank of lieutenant colonel. He was later placed in charge of the Muscle Shoals canal construction on the Tennessee River and also built canals near Chattanooga, Tennessee and at Colbert Shoals, Alabama.

On March 4, 1907, Goethals was appointed by President Roosevelt Chairman and Chief Engineer of the Isthmian Canal Commission. He served in that position until completion of Canal construction in 1914. He then served as Governor of the Panama Canal until his resignation January 17, 1917.

s Chief Engineer, Goethals faced many daunting tasks. Aside from the task of eliminating disease, Goethals was faced by many unique problems, any one which was a stupendous work in itself. The first of these was the cutting down to a much lower level several good-sized mountains near the center of the Isthmus in order to minimize the elevation of the canal itself. The second mightiest feat was the damming of the powerful and erratic Chagres River with the Gatun Dam and the formation of Gatun Lake. The third was the building of the huge concrete locks with filling and emptying systems and great steel gates with opening and closing devices. The plans were revised many times, and the chief engineer himself spent many sleepless nights working out the complicated calculations. But finally the job was done, and in 1915 General Goethals received the thanks of U.S. Congress "for distinguished service in constructing the Panama Canal."

From 1919 to 1928 Goethals was President of George W. Goethals and Company, a New York engineering firm and Advisor and Consulting Engineer to the Port Authority of New York. Named in his honor, one of the first structures built by the Port Authority was the Goethals Bridge, spanning Staten Island and Elizabeth, New Jersey, which opened to traffic in 1928.

Of course, City College also honored it famous student. In 1930, Goethals Hall was opened on North Campus, where it housed the then School of Technology for the following 30 years.