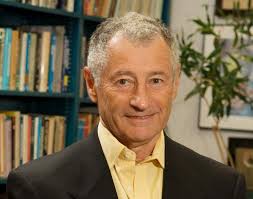 "You chop these long messages into fixed-length blocks and then you send them independently. These blocks then queue up to use the communications resource. Every block is the same size, so the little guys never get stuck behind the big guys."
Leonard Kleinrock, Wired Magazine

Dr. Leonard Kleinrock pioneered the mathematical theory of packet networks, the technology underpinning the Internet. For his enormous contribution to understanding the power of packet networks he was honored with the Charles Stark Draper Award as one of the fathers of the Internet, along with Vinton Cerf, Robert Kahn, and Larry Roberts. He is a developer of ARPANET, the seedling that grew into today’s global Internet, and his laboratory’s UCLA Host computer became the first ARPANET node in September 1969. A month later, he directed the first transmission to pass over the blossoming network.

After attending Townsend Harris High School, Kleinrock received a bachelor’s degree in electrical engineering from The City College of New York in 1957. He earned a master’s degree (1959) and a doctorate (1963) in electrical engineering from the Massachusetts Institute of Technology. MIT had many computers, and Kleinrock realized that they would eventually have to interact with each other in a network. He knew that the mathematical descriptions of existing communication networks, such as telephone exchanges in which a single node connected only to another node, would be inadequate for describing future computer networks, which would have many nodes. For his doctoral thesis, Kleinrock extended the mathematical discipline of queuing theory to such networks. Describing how data would flow through a network was an extremely complex problem, but he was able to predict how computer networks would perform. This work provided a mathematical description of packet switching, in which each data stream is broken into discrete, easily conveyed packets.

Kleinrock became a professor of engineering (and then later computer science) at UCLA in 1963. The Advanced Research Projects Agency (ARPA), which later became the Defense Advanced Research Projects Agency (DARPA), was funding computer research at several American universities, and it was felt that research would be more efficient if the various institutions could share computer resources over an ARPA-funded network. Beginning in 1967, Kleinrock was involved in designing this network, ARPANET. In September 1969 Kleinrock’s group connected a packet-switching computer to a SDS Sigma 7 computer, which became the first node on ARPANET.

On October 29, 1969, Kleinrock and his student Charley Kline sent the first message over ARPANET to an IMP and computer at Stanford Research Institute (now SRI International) in Menlo Park, California. The message was going to be the word login; however, the connection crashed after the letter o, so the first ARPANET message was lo. By the end of 1969, ARPANET was complete.

Kleinrock chaired a National Research Council committee that produced a report, Toward a National Research Network (1988), calling for a single high-speed network to connect the existing fragmentary computer networks. U.S. Sen. (and future vice president) Al Gore championed the report, and in 1991 the High Performance Computing Act (also known as the Gore bill) was passed. Federal funding was made available for high-speed networks, dramatically upgrading the country’s computing infrastructure.

In 1998 Kleinrock and one of his students, Joel Short, cofounded Nomadix, Inc., which manufactured devices that enable Internet access in public places such as hospitals, airports, and hotels. Nomadix was bought by the Japanese company DOCOMO interTouch in 2008. He and computer scientist Yu Cao in 2007 founded Platformation Technologies, LLC (later Platformation, Inc.), which allows grocery shoppers to compare prices between local supermarkets online.

Dr. Kleinrock is a member of the National Academy of Engineering, the American Academy of Arts and Sciences, an IEEE fellow, an ACM fellow, an INFORMS Fellow, and an IEC fellow. Among his many honors, he is the recipient of the Ericsson Prize, the NAE Draper Prize, the Marconi Prize, the Okawa Prize, and was further recognized when he received the 2007 National Medal of Science, the highest honor for achievement in science bestowed by the President of the United States.

Read Wired’s profile on Kleinrock’s contribution to the Internet.