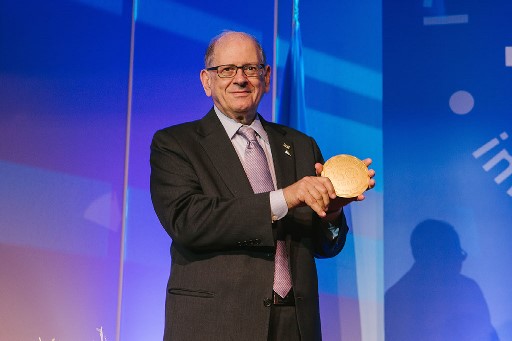 Co-Creator of the Fundamental Communications Protocols of the Internet

"The Internet has scaled by a factor of over a million over it’s lifetime – I don’t know of any other technological advance that has scaled comparably – because it’s not actually about the technology. It’s about the protocols."
From a 2014 interview at Princeton University

Robert Kahn is currently President and CEO of the Corporation for National Research Initiatives (CNRI), a non-profit organization focused on research and development for the national Information infrastructure. He initiated the U.S. government’s Internet program and is co-creator with Vint Cerf of the TCP/IP protocols – the fundamental technology underpinning the Internet, making him one of original architects of the information age.

After receiving a Bachelor of Electrical Engineering from the City College of New York in 1960, Dr. Kahn earned his masters and Ph.D.  from Princeton University in 1962 and 1964 respectively. He worked on the Technical Staff at Bell Laboratories and then became an Assistant Professor of Electrical Engineering at MIT. He took a leave of absence from MIT to join Bolt Beranek and Newman, where he was responsible for the system design of the ARPNET, the first packet-switched network. In 1972 he moved to DARPA and subsequently became Director of DARPA's Information Processing Techniques Office (IPTO). While Director of IPTO he initiated the United States government's billion dollar Strategic Computing Program, the largest computer research and development program ever undertaken by the federal government. Dr. Kahn conceived the idea of open-architecture networking and was responsible for originating DARPA's Internet Program. Until recently, CNRI provided the Secretariat for the Internet Engineering Task Force (IETF). Dr. Kahn also coined the term National Information Infrastructure (NII) in the mid 1980s, which later became more widely known as the Information Super Highway.

In a 2014 interview at Princeton, Kahn said of his accomplishment, “If you tried to do what Vint and I did back then today, you probably couldn’t do it. Nobody thought it was a good idea then, so we had relatively free rein…The Internet has scaled by a factor of over a million over it’s lifetime – I don’t know of any other technological advance that has scaled comparably – because it’s not actually about the technology. It’s about the protocols.”

In his recent work, Dr. Kahn has been developing the concept of Digital Object Architecture to provide a framework for interoperability across heterogeneous information systems. This work is being implemented in many applications, such as the DOI System being developed by the International DOI Foundation, enabling content identification and providing a persistent link to its location on the Internet.

The numerous awards Dr. Kahn has received include the Presidential Medal of Freedom, the National Medal of Technology, Japan Prize, Queen Elizabeth Prize for Engineering, and the A.M. Turing Award. He twice received Department of Defense Civilian Service Award.  He is a member of the National Academy of Engineering and the National Academy of Sciences, and in inductee into the Inventors Hall of Fame and the Internet Hall of Fame. Kahn is the recipient of numerous honorary degrees, including the Doctorate of Science, honoris causa, from The City College of New York.  He currently serves on the Grove School of Engineering’s board of Advisors.