Man of the Year

< Home / The Grove School of Engineering / Man of the Year 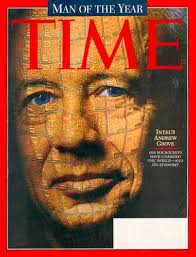 And so TIME chooses as its 1997 Man of the Year Andrew Steven Grove, chairman and CEO of Intel, the person most responsible for the amazing growth in the power and innovative potential of microchips.

He has a courageous passion alloyed with an engineer's analytic coldness, whether it be in battling his prostate cancer or in guiding Intel's death-defying climb to dominate the market for the world's most important product.”