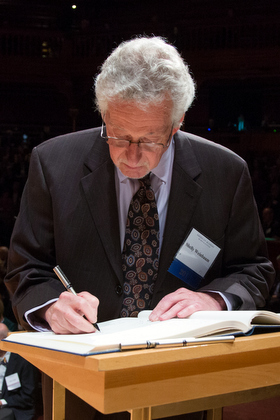 “I have worked towards equality for all my 42 years at CCNY, so this award signifies recognition of how much I have been able to change the social fabric of the College and the Grove School of Engineering since I became an activist.”
Shelly Weinbaum, on receiving the National Biomedical Engineering Society’s Inaugural Diversity Award in 2009

Sheldon Weinbaum, born in Brooklyn to a father emigrated to the United States from Ukraine in 1921and a mother who came from a poor immigrant Polish family, is a CUNY Distinguished Professor in the Grove School, Emeritus, and biofluid mechanician whose political passion impacted the social fabric of the College as much as his brilliant research and exceptional teaching contributed to its academic reputation.

A CUNY Distinguished Professor, Emeritus, of biomedical and mechanical engineering at City College, as of 2013 he was one of only nine living individuals who is a member of all three U.S. national academies (National Academy of Sciences, National Academy of Engineering and the Institute of Medicine, as well as the American Academy of Arts and Sciences. He was the Founding Director (1994-1999) of the New York Center for Biomedical Engineering, a regional research consortium involving the biomedical engineering program at CCNY and eight of the premier health care institutions in New York City. In 2002 he became the first engineer to be awarded a Guggenheim fellowship in molecular and cellular biology.

Weinbaum arrived at the Department of Mechanical Engineering in 1967, armed with a Ph.D. from Harvard. He had left a promising career at General Electric and turned down a teaching offer from Princeton. As then CCNY President Gregory Williams later observed in a tribute to the founder of bioengineering at City College, he was almost fired one year later when, true to his beliefs, he led an anti-war demonstration in Steinman Hall.

A lifelong advocate for women and minorities and the economically disadvantaged, when City College was at its financial nadir in the 1970’s, Weinbaum was disillusioned by the abandonment of free tuition, but he realized that the school had the opportunity to become a pioneer in diversity, a cause that he embraced wholeheartedly. In 1992, this led him to spearhead a group of CUNY professors and students in a lawsuit against New York State, Weinbaum vs. Cuomo, which contended that the state’s financing of public higher education was racially discriminatory, favoring the overwhelmingly white SUNY over CUNY which was two thirds minority.

Throughout it all, Weinbaum maintained a research career of exceptional breadth, brilliance and productivity.  He is internationally recognized for his revolutionary hypotheses on how organs and cells function. His breakthroughs, made with numerous collaborators in the biological sciences, include the discovery of the pore through which LDL cholesterol crosses the endothelium, the role of cellular-size microcalcifications in the rupture of the fibrous caps of vulnerable plaque leading to thrombosis, and the Weinbaum-Jiji equation for bioheat transfer. In each case he resolved a long-standing “mystery” by discovering either a new structure—such as micro-calcifications in the fibrous caps of vulnerable lesions or leaky junctions for transport of LDL across vascular endothelium, or a new function for a known structure – by demonstrating that the glycocalyx on endothelial cells senses the fluid shear stress of the blood flow and transmits it to the intracellular cytoskeleton. He has also proposed a new concept for a high-speed train where lift is generated by a giant ski riding on a soft porous material in a channel with impermeable side-walls.