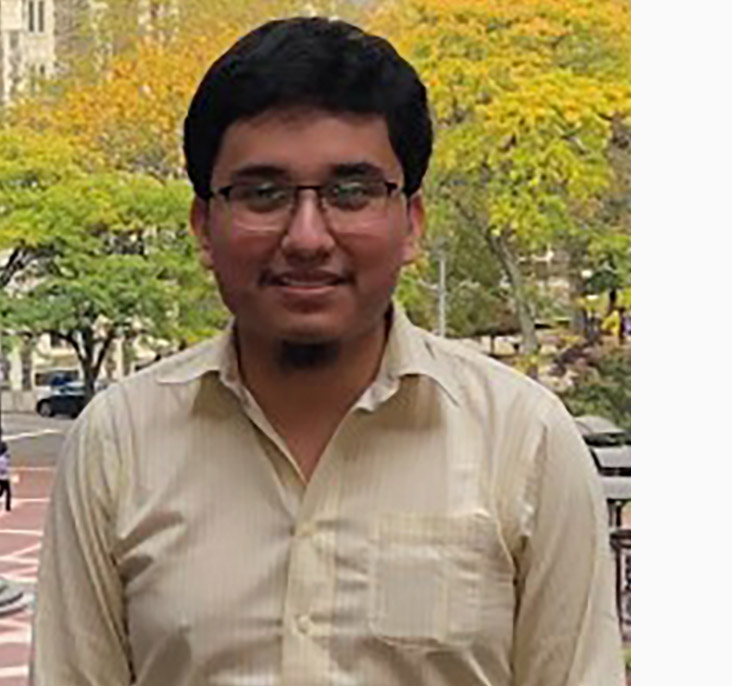 Alejandro Espinosa first visited the City College campus as a five-year-old learning to ride a bike with his uncle. Little did he know that he would later become a Climate Policy Fellow in the Colin Powell School and be featured on the Today Show reflecting about General Powell’s impact on students like him. As a child and adolescent, Espinosa faced the challenge of being on the autism spectrum. As the child of Mexican immigrants, he also needed ESL support. Unsupportive primary and middle schools nearly derailed his education, but he persisted with staunch support from his mother and family. He is now preparing to graduate from CCNY with a bachelor’s degree in political science.

Please tell me a little about your background. What brought you to City College?

I come from a family of Mexican immigrants, and I grew up in New York City. I have known about CCNY’s presence since I was five years old. My uncle used to live next to the firehouse on West 139th Street and he and I would often visit City College to learn how to ride bikes. I would often visit him and notice a nice campus right across from Amsterdam Ave and thought that it would be a dream to attend here. I learned afterward about what it meant to work to reach the milestones that were to come. My mom thought at first that City College was a mansion where rich people live, given its unique architecture. In Mexico, she is always used to walls dividing rich and poor residents in the same neighborhood.

You mentioned that you have learned what it means to struggle to achieve milestones. Tell me more about that.

I have faced and overcome several hurdles in my life, starting very early on. My main hurdle was different than the major hurdles that people often face based on immigration status and racial barriers. It involved suffering from autism in the first years of my life, where time and time again until middle school, the leader of the school would come up to my mother and ask her to take me to an institution where it was just for people with mental problems, because the school couldn’t handle it. My mom, with an immigrant background, didn't know how the system worked but thought for a bit until someone went to her and said, "Your son is extremely intelligent and will do great things. Be with him to ensure that he will develop just fine." This statement saved my life. Who knows what would have happened to me thereafter.

Another hurdle was when the middle school assistant principal told my mother I needed to go to another Middle School because I needed ESL services. As my mom successfully lobbied to keep me in my middle school, I transferred classes twice in the 6th grade. The effects of this devastating circumstance hindered my ability to make friends, keep up the academic excellence and enjoy the normal middle school experience.

Not until I was accepted into high school did circumstances hit a positive turn. With academic excellence reaching normal levels, I was thrilled that I could finally turn a blind eye to things. Even so, I endured a huge disparity of social skills between me and my generation, as the two monstrous circumstances caused this to happen.

The other big obstacle was our income inequality that has gotten worse since the early 1980s.

What brought you to City College, and how did you choose your major?

With the academic credentials, I wanted to come here, along with other colleges throughout the state. As the decisions came, my decision narrowed between City and Queens College and chose City College by a narrow margin. I came to City College thinking I was going to major in Math and minor in Secondary Education. My journey from there has changed in ways I could've never imagined. I declared a history major and education minor, then dropped that and settled on political science.

How have CCNY and the Colin Powell School helped you on your career path?

I was very proud when I was accepted into the Climate Policy Fellowship at the Colin Powell School. This fellowship has allowed me to grow the number of connections and outreach I'm able to do. I question myself, is this the end of the social skills inequality I have with my generation? This remains to be seen but future projections say yes!

And as we all heard about the devastating news about the death of a great leader and statesman who became the first African American secretary of state, it broke my heart profoundly because I never shook hands with him. I thought that I wanted to fulfill much of his legacy in the policy world that I'm about to enter. It was an honor to be selected to be on the Today Show to talk about General Powell’s legacy. I did not expect this coming, as I knew I wanted to represent the Colin Powell School to the public well. And as the interview was released to the public, I received high praise from most people that I knew.

At CCNY I have been able to choose the academic path and the career path that I want to complete, and none stood in my way. I've been extraordinarily happy to be in an educational institution that takes public service extremely seriously and enjoyable.

What are your reflections now that you’re finishing your time as an undergraduate at CCNY?

City College was more than a great choice; it is my second home. I still look at my admissions acceptance letter every once in a while, and I will never forget the day I was accepted. It has been over 39 months that I’ve been present here at City College. As my undergrad journey begins to reach the beginning of the end, my dream of attending City College since the age of five has been complete. Looking back, I see that this journey has been incredible to the fullest. With academic life both during in person and virtual, and now hybrid, my happy ever after is present with me, here in the finest and greatest institution. My life here was at its finest, just as in high school, even during the pandemic. As I move forward on my path, I hope to represent City College to the best of my ability.