Explore Who You Are and Talk to Everyone 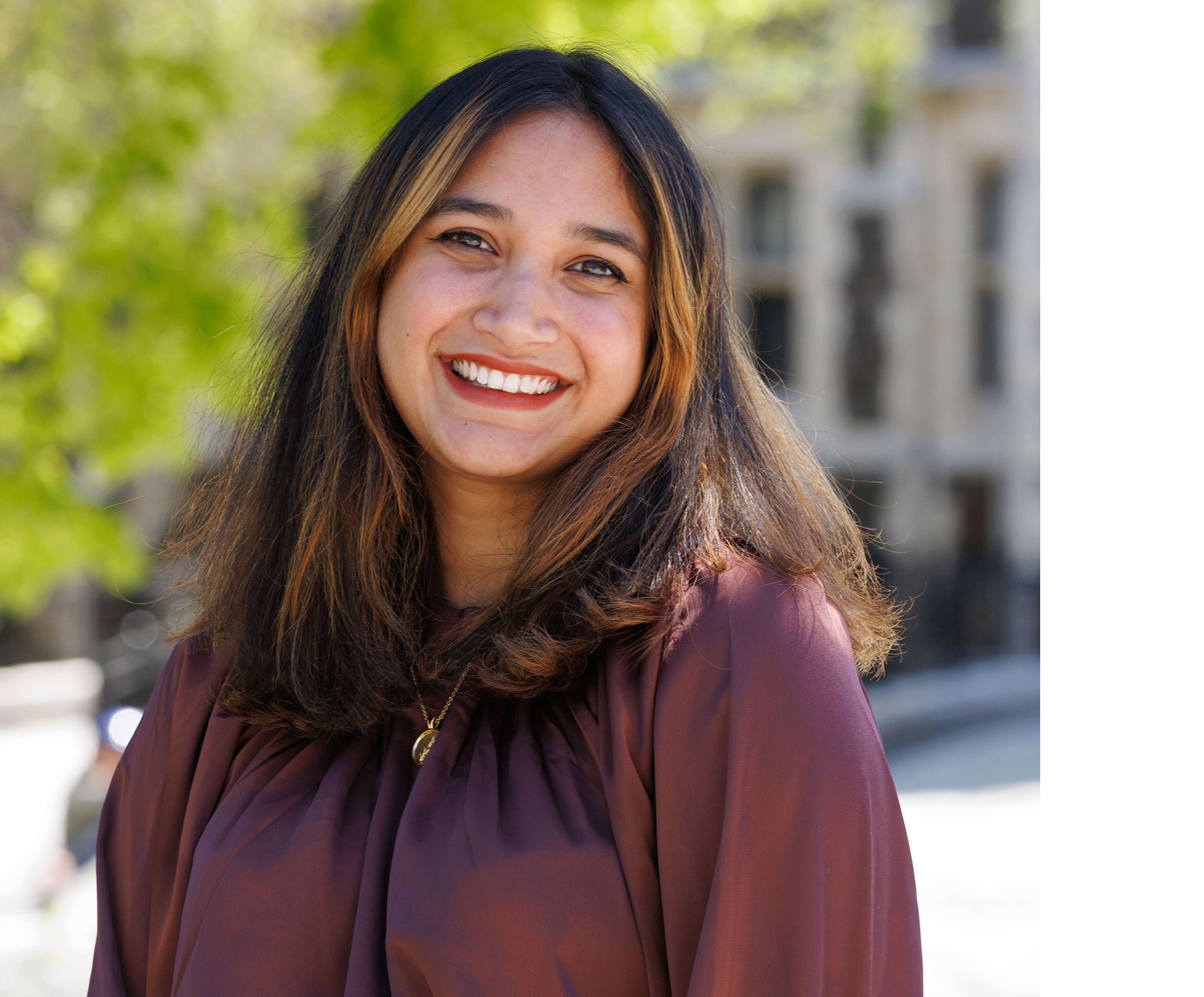 Explore Who You Are and Talk to Everyone Says Salutatorian Teresa Mettela, Now a Reporter on Capitol Hill

Salutatorian Teresa Mettela was the first in her family to be born in the United States, after her parents emigrated from South India. Metella was raised in Flushing, Queens where she gained a deep-rooted sense of community and leadership. She developed her commitment to local activism through her work as a journalist for the Queens Daily Eagle and the Queens Courier. During her time as a freelance reporter, she covered pressing national issues such as the reopening after the COVID-19 shutdown, the rise in AAPI hate crimes, and awareness efforts for the 2020 Census. At CCNY, Teresa built her skillset as a writer by studying a broad range of disciplines, including international studies, sociology, gender studies, philosophy, and economics. During her junior year, she conducted an independent journalism study that focused on humans at the center of migration and was featured by the HarlemView, an online publication featuring work by CUNY students. She interned for The Nation and is currently working with The Wall Street Journal as a politics reporter on Capitol Hill, where she has written about Ukraine, public sector unions, and government transparency. She is also part of Colin Powell’s NBCU Academy Fellowship Program, where she continues to build her skillset as a dynamic storyteller and multimedia journalist.

Please share a little about your background. Where are you from?

I was born and raised in Flushing, Queens and have lived there for 18 years before moving to the suburbs. I went to public schools all my life and have come to appreciate their grit, their diversity, and their free breakfast. Growing up, I was constantly scribbling story ideas and poetry in the margins of my composition books. Much like other teenage girls in middle school, I became engrossed with the Hunger Games Trilogy. In my spare time, with the (misguided) encouragement of my best friend, I started writing Hunger Games fanfiction online. It was my escapist fantasy – a Narnia-esque world where I was a celebrated writer with fans leaving me comments demanding chapter after chapter. But being raised as a child of immigrants, there was always a certain pressure to become one of the Top Three: a doctor, lawyer, or engineer. In high school, I struggled through AP Calculus and soared in AP English Language (which should’ve clued me in). Slowly and reluctantly, I found myself in spaces that challenged me as a writer. In high school, I was part of a program called Girls Write Now where I met my first writing mentor, Christy. She was the push that swung my pendulum into the humanities world.

For most of my life, I have been fortunate enough to seek guidance from my older sister. When I made my decision to enroll as an undergraduate student at CCNY, she was starting her senior year there. The comfort of having my older sibling around, in addition to my scholarship from the Macaulay Honors Program, ultimately brought me to City College.

What is your passion or purpose behind pursuing what you did at City College?

In a society where journalists are constantly under attack and news is deemed “the enemy of the people,” my passion for dynamic storytelling only grew stronger. As someone who values objectivity and unbiased news, I saw how the media was increasingly becoming a spectacle in the United States. Certain news channels and media outlets are riddled with fake news – it was getting harder and harder to find accurate reporting. At City College, I took classes like Writing & Reporting and Introduction to Media Studies which provided a foundation for my journalism career, but I also took Race & Media and Transnational Feminisms which ensured that my reporting was inclusive and intersectional. I made sure to not only connect with students and staff from the Journalism Department, but also the Departments of Sociology, Philosophy, and Gender Studies. The flexibility I had at CCNY helped me engage with a myriad of classes, which diversified and informed my perspective as a journalist.

Tell us about your career path. How has the Colin Powell School helped you along the way?

While taking journalism classes at the Colin Powell school, I met a lot of mentors who have provided me with immense support and guidance. It was only after a trip to NBC Studios with Professor Gary Pierre-Pierre that I worked up the courage to email the editor of the Queens Daily Eagle and ask to freelance with his team. The former editor, David Brand, took a chance on me. I continued to report local news in Queens for the next couple of years. It was this experience that taught me the ins and outs of journalism. I reported daily, wrote and rewrote, and built lasting relationships with the people in my community. In my junior year, I connected with Professor Nevins-Taylor who saw my potential as a student journalist. She gave me the opportunity to partake in an independent study where I studied immigration patterns in the US and published an article with a student-run publication, the HarlemView. Later, I was accepted to a fellowship with The Nation, where I did a contrast piece that highlighted resources for DACA recipients in NYC. The Colin Powell School creates an environment for students that welcomes diversity, innovation, and success; I would not be where I am today without the support of my professors and fellow students. I am most thankful for the community of writers at the Colin Powell School who build each other up and push each other to achieve greatness.

The opportunities, fellowships, and experiences that City College offers are nothing short of irreplaceable. With the coronavirus pandemic, I wasn’t able to study abroad like I originally planned to in my senior year. However, through Colin Powell’s fellowship programs, I was able to spend my last semester in Washington, DC, studying public policy and journalism. Through this fellowship, I applied to The Wall Street Journal’s reporting internship and went through a rigorous application process. In the month before my move from NYC to DC, I got an offer from the Journal. Now, I’m living on Capitol Hill covering the Congress almost everyday. Within four weeks, I have already interviewed multiple Congress members, reported on pressing national news, and gotten rejected by Senator Bernie Sanders. I credit all of this invaluable experience to the exposure and the encouragement I received from my mentors at CCNY, especially Professor Nevins-Taylor. Currently, I have three bylines with the Journal and working on my fourth!

Do you have any advice you could give to current or future students?

It’s okay to not know what you’re doing at first. I wish someone had told me that. College is when you figure out who you are, what you like, what you hate, and where the good library spots are (I’m not kidding). If you’re just beginning your college experience, try to really think about what you expect from your future life and/or career. I started my college career as an undecided major and I do not regret it one bit. I switched my major at least three times before finally landing on International Studies. So, take that pottery class you've been eyeing. Talk to everyone – the scary professor, the Linguistics major, the kid in the back of the class. I guarantee you that there’s something to learn from everyone here, especially at CUNY. The college experience is truly what you make of it and it can pass you by if you remain complacent. As students, it’s your responsibility to seek out, take, and even create opportunities if you can.

What does it mean to you to have been selected as a CPS salutatorian?

I am truly honored to have been selected as a CPS salutatorian. The Colin Powell School is a transformative school that has molded my narrative tremendously. I began with only ideas of what I wanted to do, but I’m leaving knowing that I’ve achieved so much in only four years. To be selected as a CPS salutatorian is a reminder to everyone at Colin Powell that you can achieve your wildest dreams here. Moving forward, I will carry the same sense of gratitude and principle into all the spaces I enter, whether that be in my personal or professional endeavors. This distinction is really an homage to the school and all it has to offer.