To view available spots and register for our courses, please see directions available under the question "How can I find classes at CCNY or CUNY?" on our FAQs.

SOC 105 Individual, Group, and Society: An Introduction to Sociology (3 Credits)

This class is required for all sociology majors and minors. 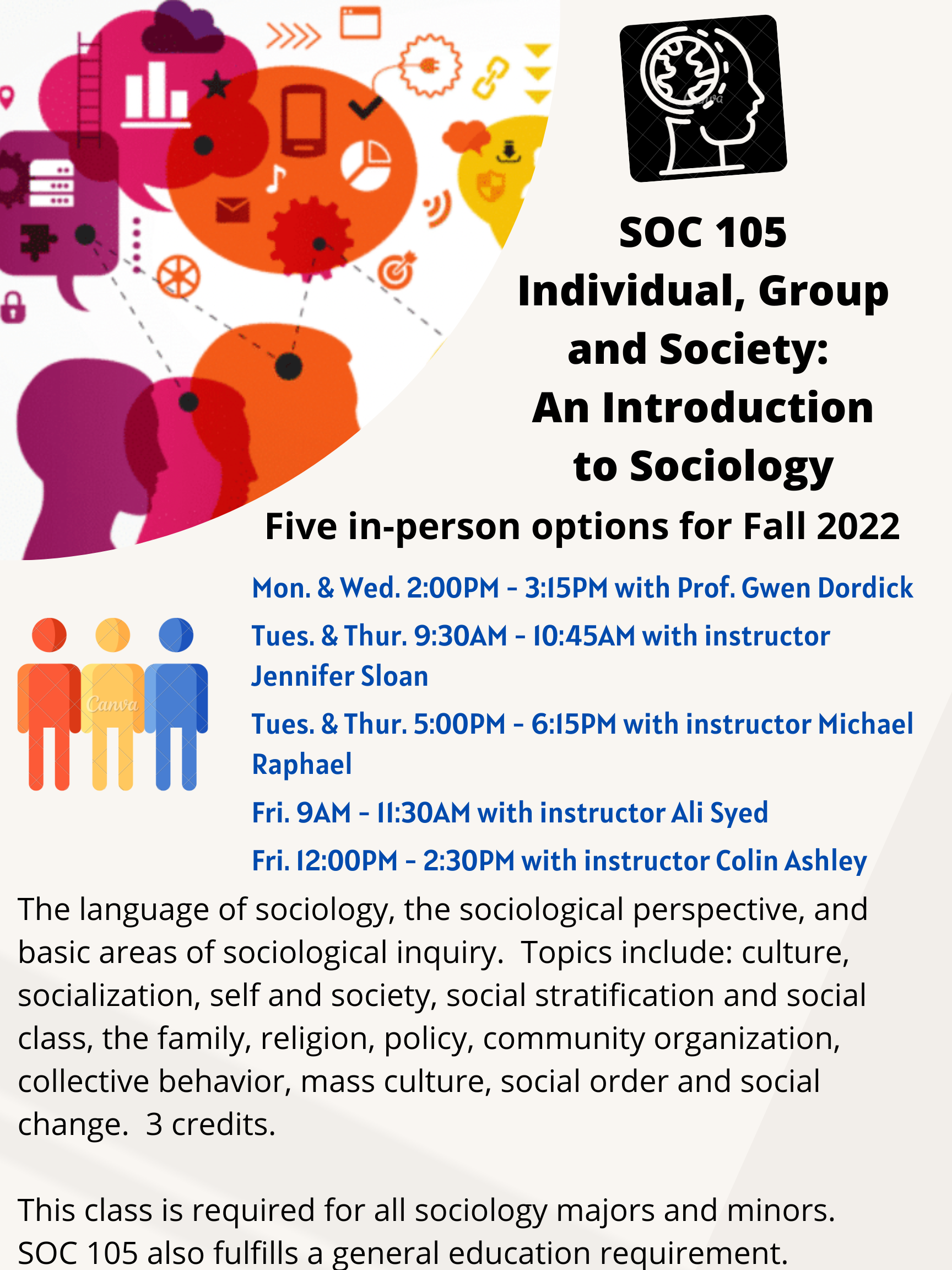 This Fall 2022 course examines the role of violence in societies by critically examining theory, research, public policy, and social justice activism, with the aims of explicating the social causes of, and effective responses to, violence. Interpersonal violence, institutional violence,and structural violence will be studied from sociological perspectives. 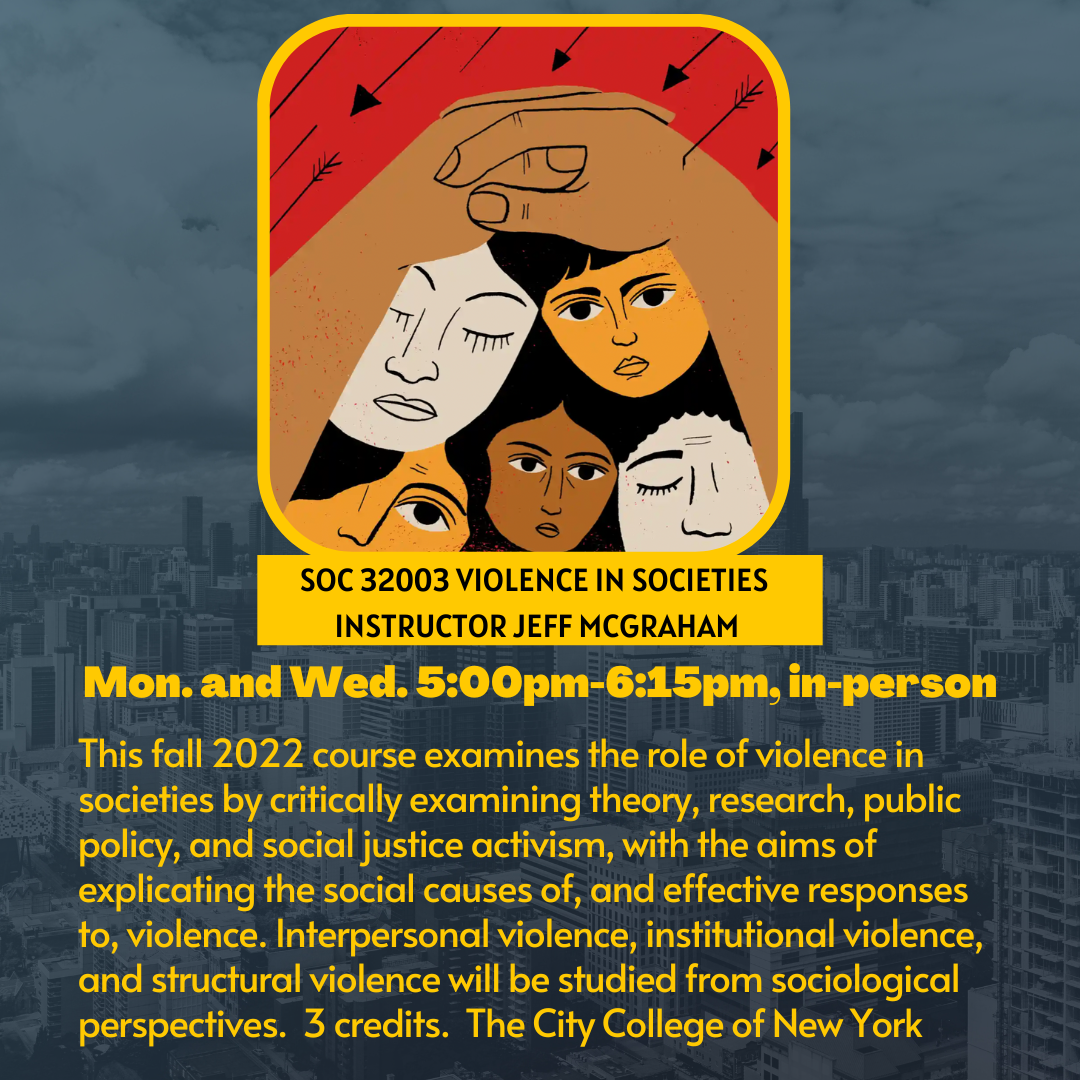 This course will explore the origins and development of capitalism as a social system composed of vertical and horizontal class relationships, with an emphasis on the interrelationship between white supremacy and working-class organization. Readings will include seminal contributions from sociology, political science, labor history, and economics, e.g. Karl Marx, W.E.B. Du Bois, Francis Fox Piven, and Robert Brenner. 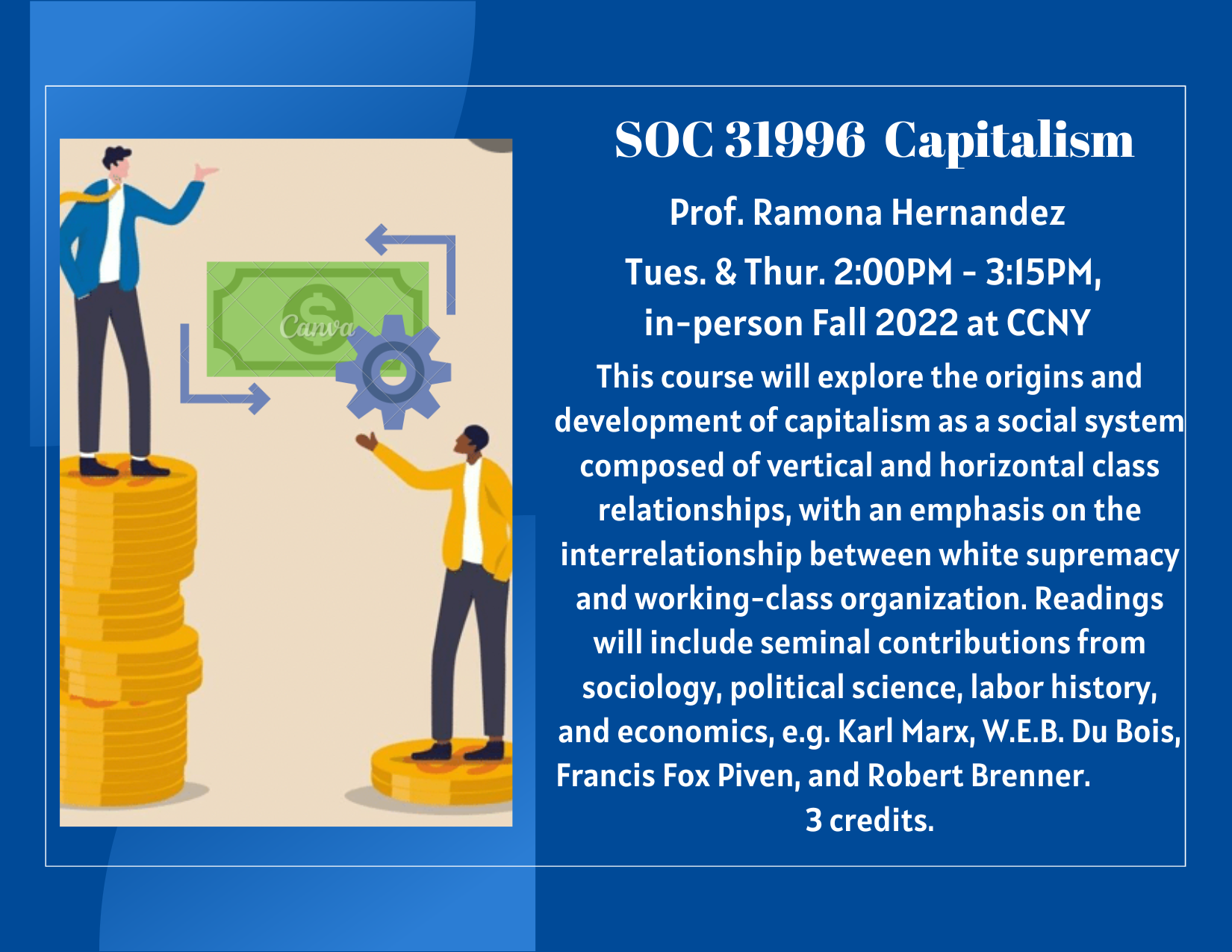 Between El Barrio and the Academic: The Struggle for the Academic Space examines how public education has been historically used to assimilate Latin American diasporas to mainstream America culture, and how, in response, educators from different intellectual traditions have resisted these neocolonial and homogenizing impulses. To chronicle the class between assimilationist and anti-assimilationist forces, Between El Barrio and the Academic reviews the passing of critical legislation such as the Arizona's 2010 Ban on Ethnic Studies (HB 2281), as well as the work of Chican@ and Mexican American activists, Latinx intellectuals, and postcolonial educators and artists. 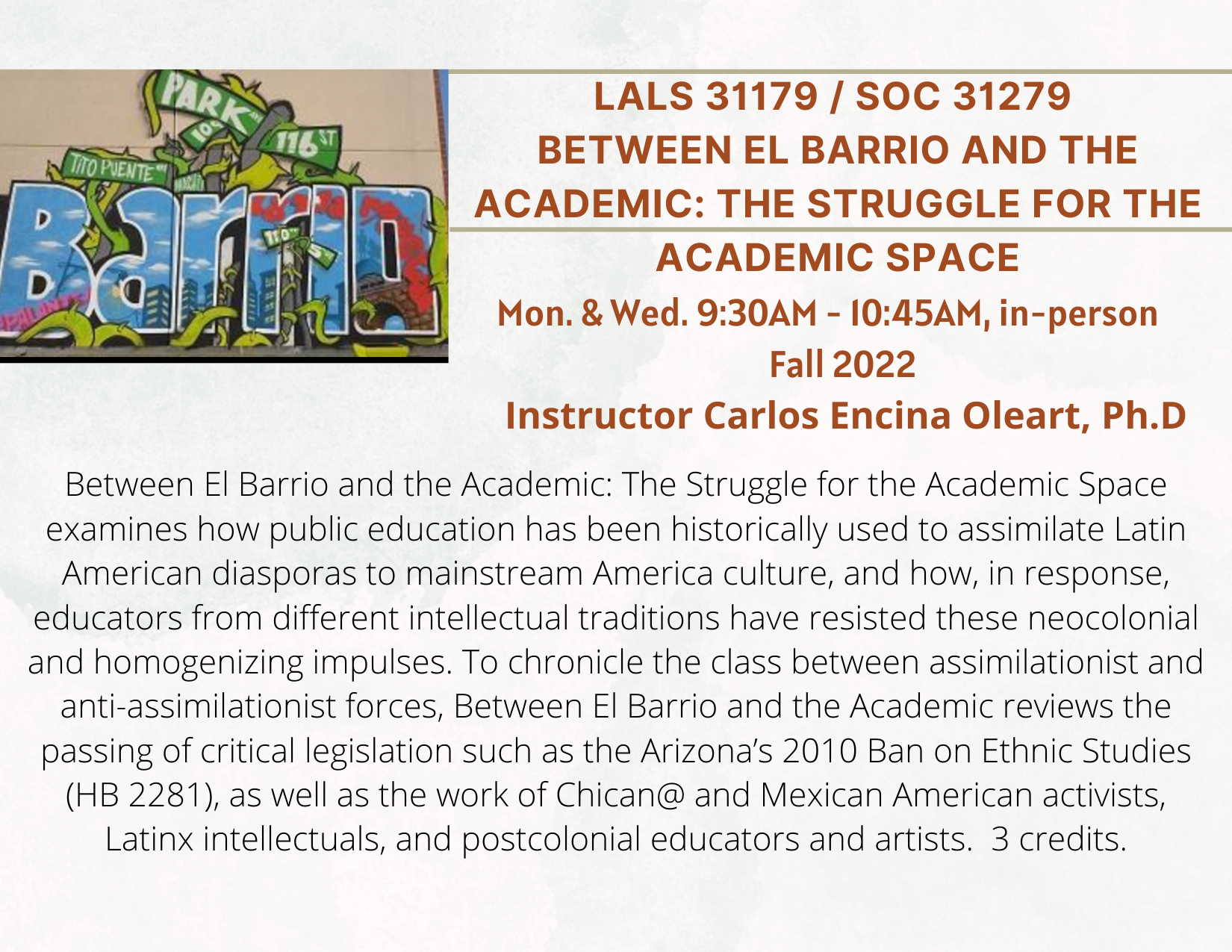 Nature and origins of the modern city, and of community life within and in relation to the metropolis. Urbanization as a
process. Types of cities and urban communities. The changing nature of contemporary cities, urban development and the dilemmas of growth. 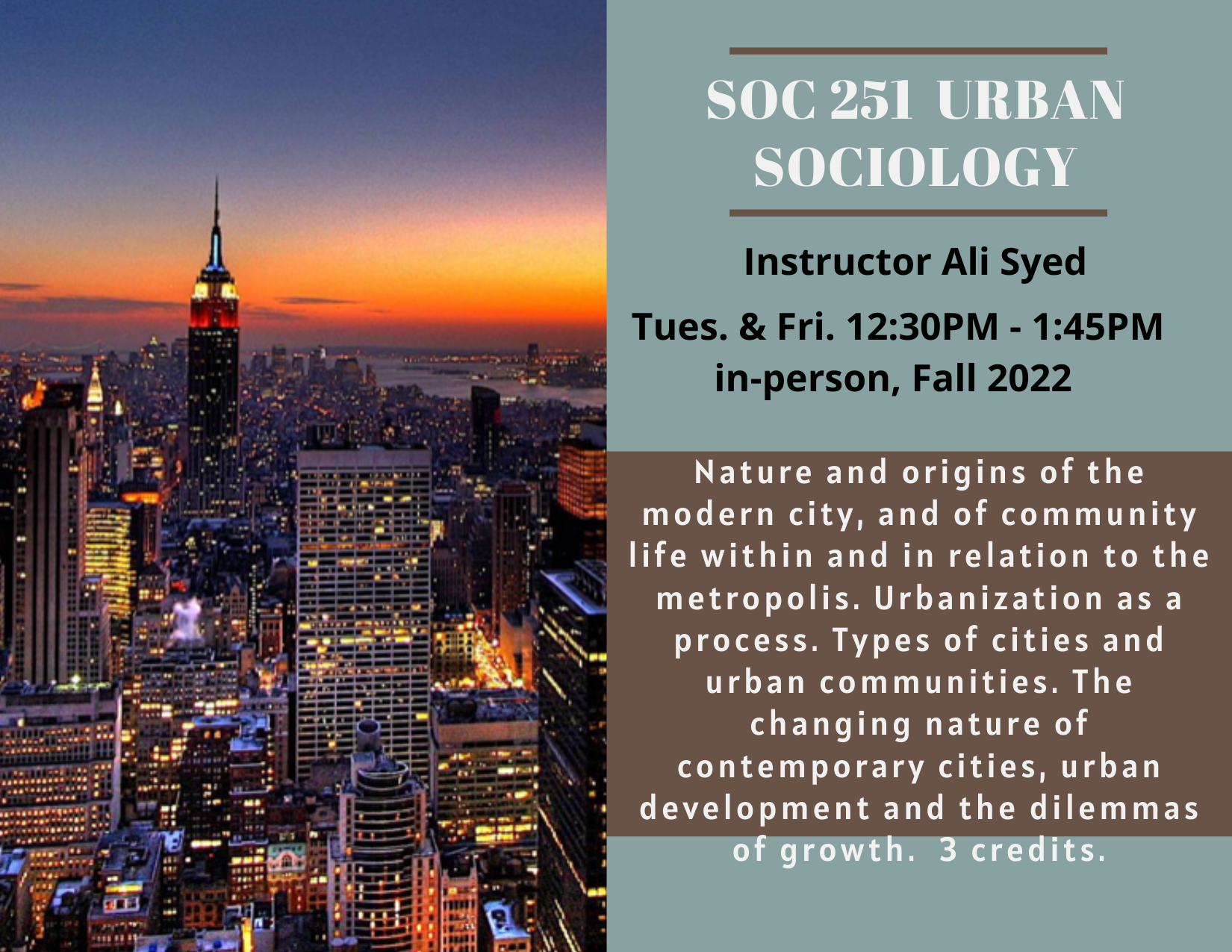 This course critically considers how some actions or groups come to be understood and shaped as "deviant." It situates
such labels of deviance within their broader historical and social context and the resulting consequences of those labels for individuals and society more broadly. 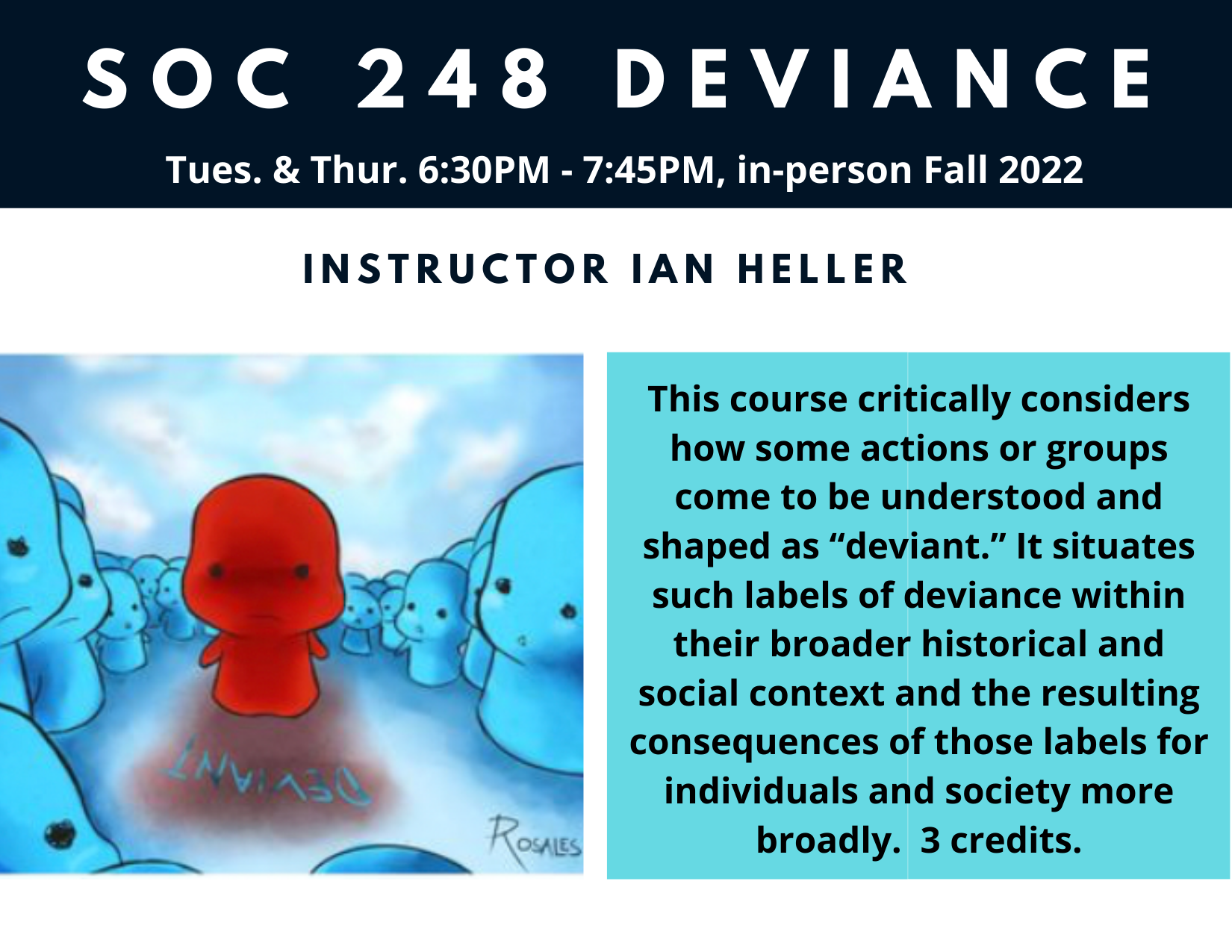 Major processes of change today in Latin America, Asia and Africa. Theories of development as applied to industrialization and changes in occupational structure; urbanization, internal migration and population
growth; national integration; changes in the class structure; revolution and reform. 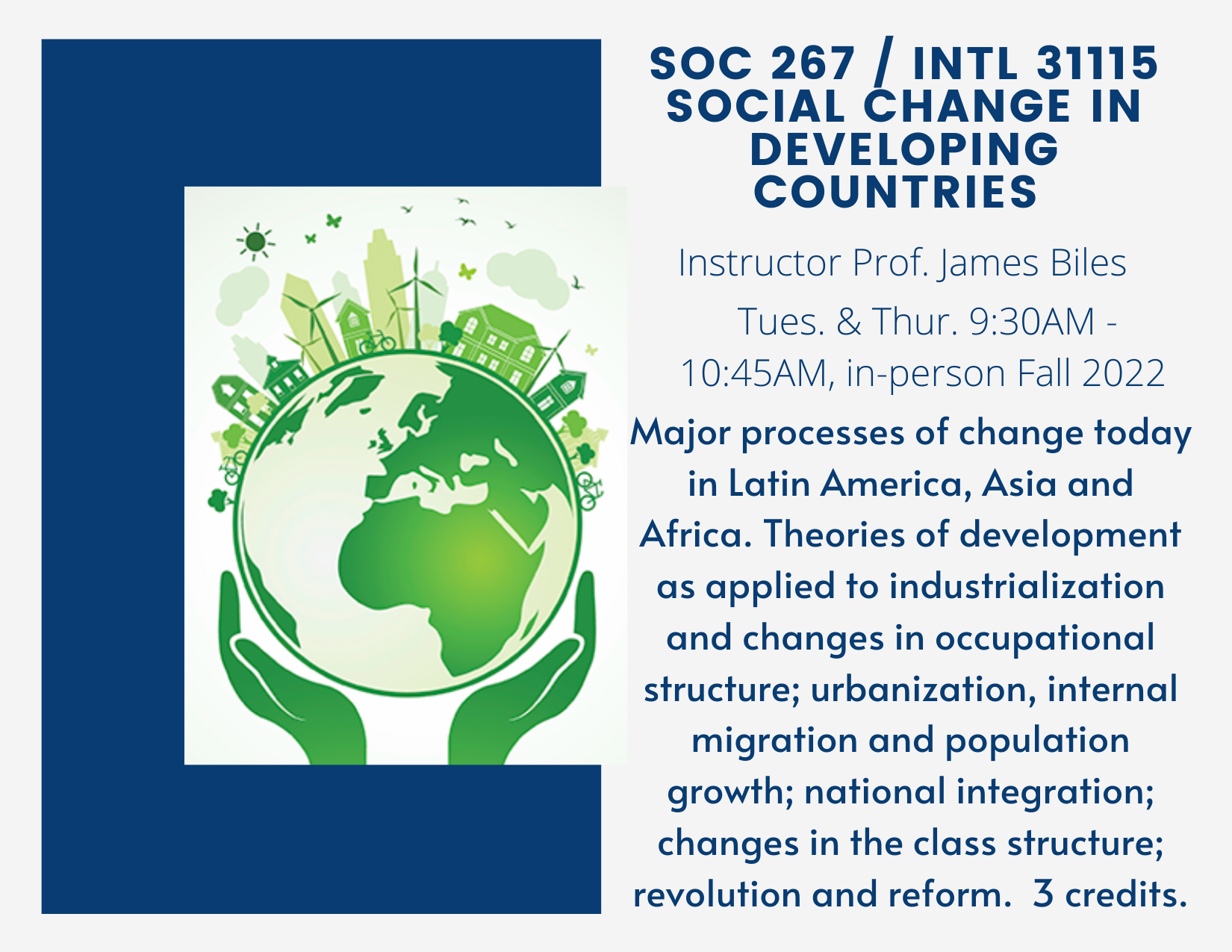 This course examines gender as social systems, with attention to how these have been used to categorize
persons, impose or assert individual and collective identities, and justify inequalities across history and national and cultural contexts. 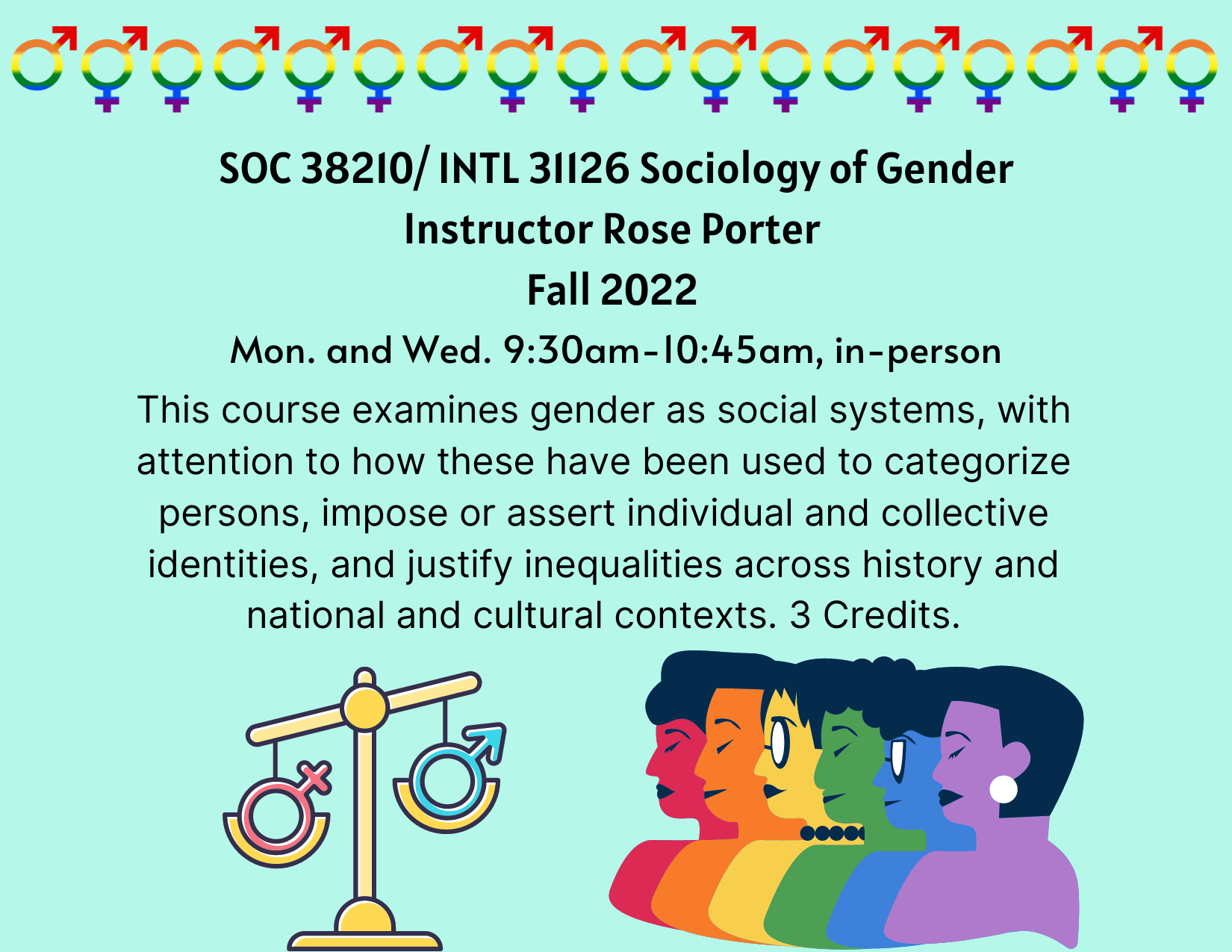 Provides a deep understanding of the ways that African-Americans have been the object of sociological study and producers of sociological knowledge. By exploring historical and contemporary phenomena, students will develop a critical understanding of the social location of African-Americans in employment, education, residence, culture, politics and other areas of society. 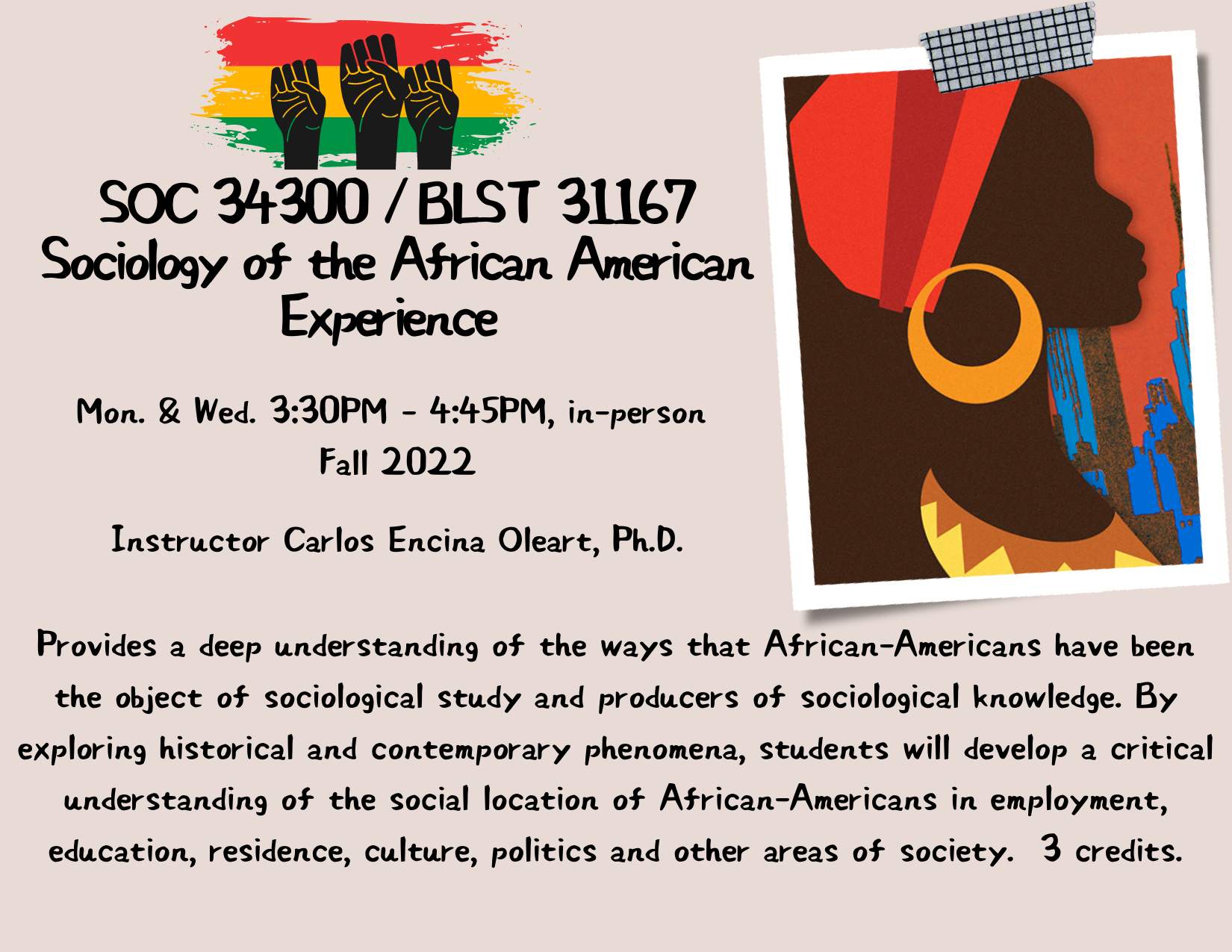 This course will examine the new immigration to the u.s. in the light of the old, searching for similarities that link this latest wave to the turn-of-the-century experience, and for the differences that make the post-1965 immigration distinctive. 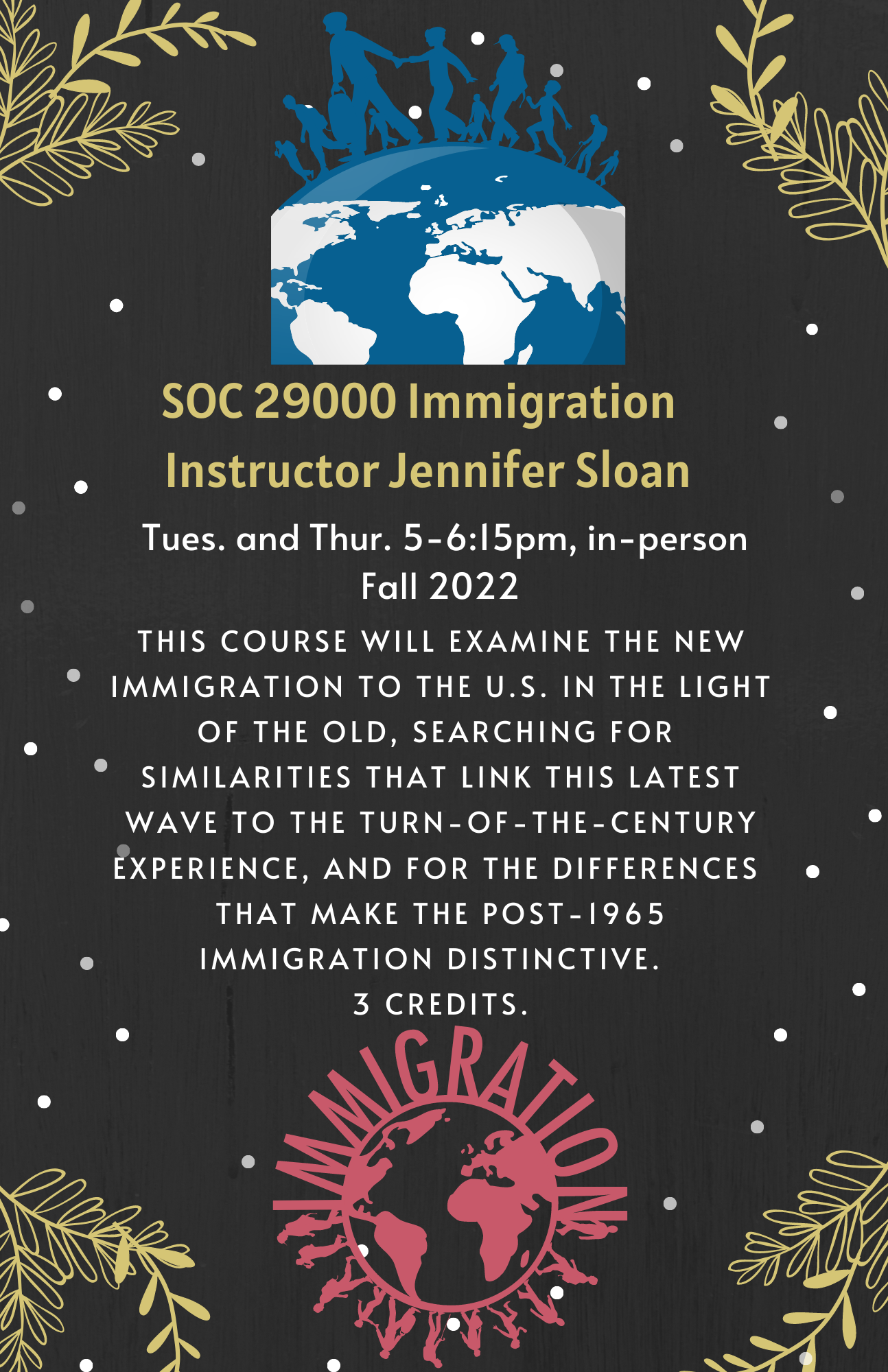 The meaning and relevance of "the Scientific Method" as a canon guiding the logic of research in sociology. Historical perspective and method of social research in the recent past. Survey research, sampling, questionnaire construction analysis, and hypothesis- testing; community study, field observation, unstructured interviewing, participant observation, control of bias.

This 4-credit course requires additional work outside of class time, such as flipped lectures, readings, and assignments. This class is required for all sociology majors. 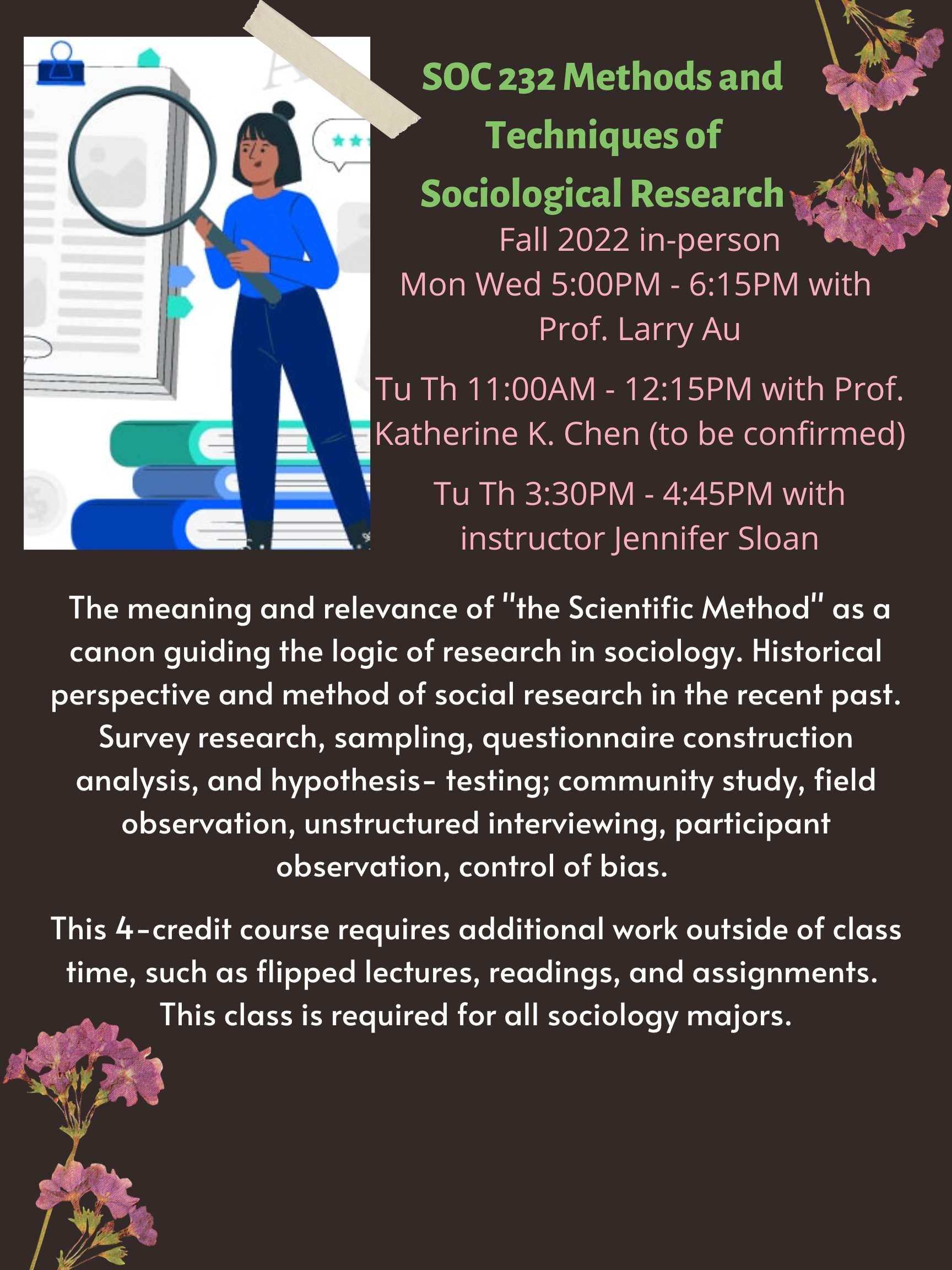 The roots of modern sociology in the ideas of nineteenth and early twentieth century theorists, such as Marx, Weber, Durkheim, Simmel, Veblen and Cooley, with emphasis on the intellectual and social context and current relevance of the concepts and propositions they developed.

This 4-credit course requires additional work outside of class time, such as flipped lectures, readings, and assignments.

This class is required for all sociology majors. 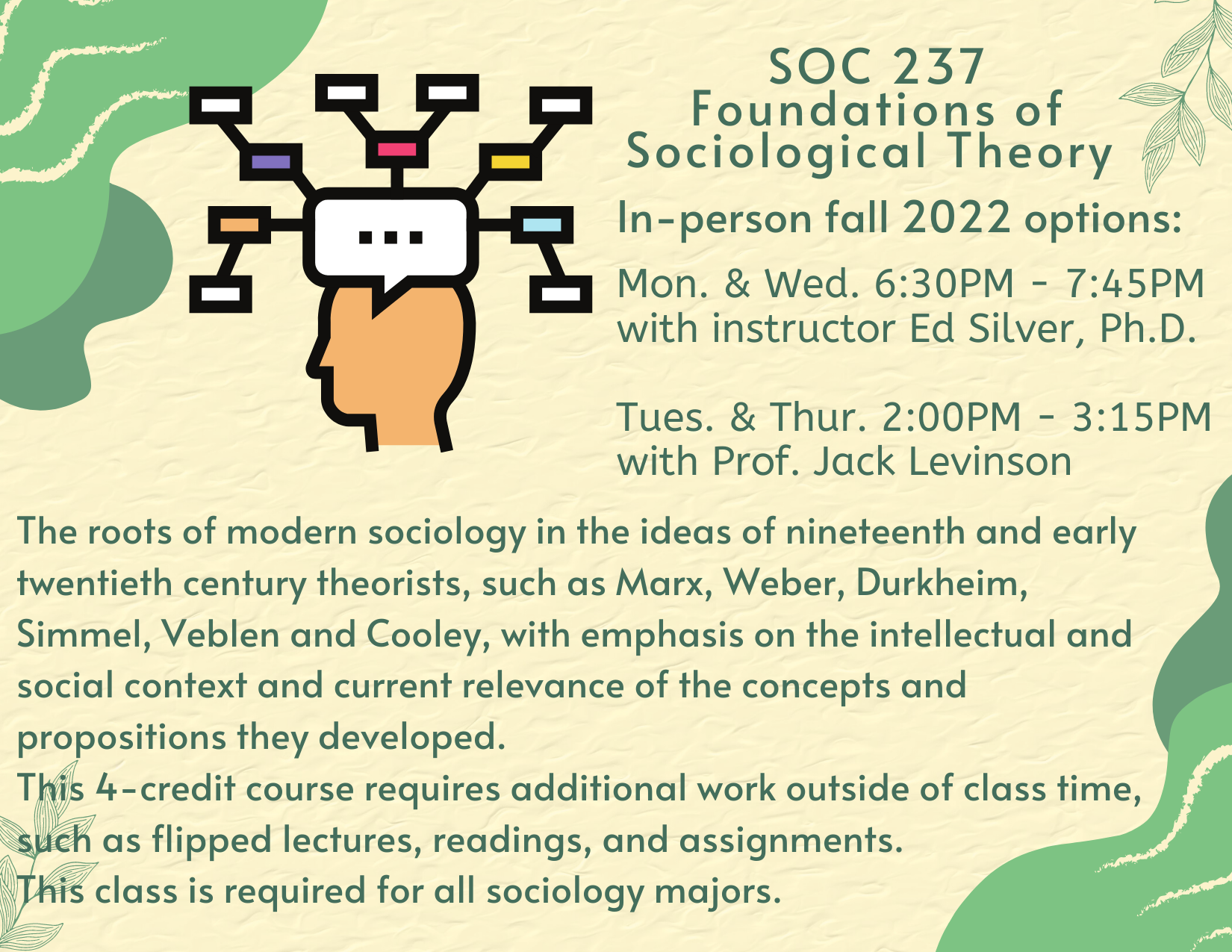 With the rise of digital health technologies, the wellness industry, and alternative medicines, medical systems now contend with challenges to physician authority. This course examines transformations in the physician- patient relationship in the U.S. and globally, and increased coordination with other health professionals and stakeholders, such as nurses, EMTs, minoritized populations, and patient activists, in the social organization of medicine. 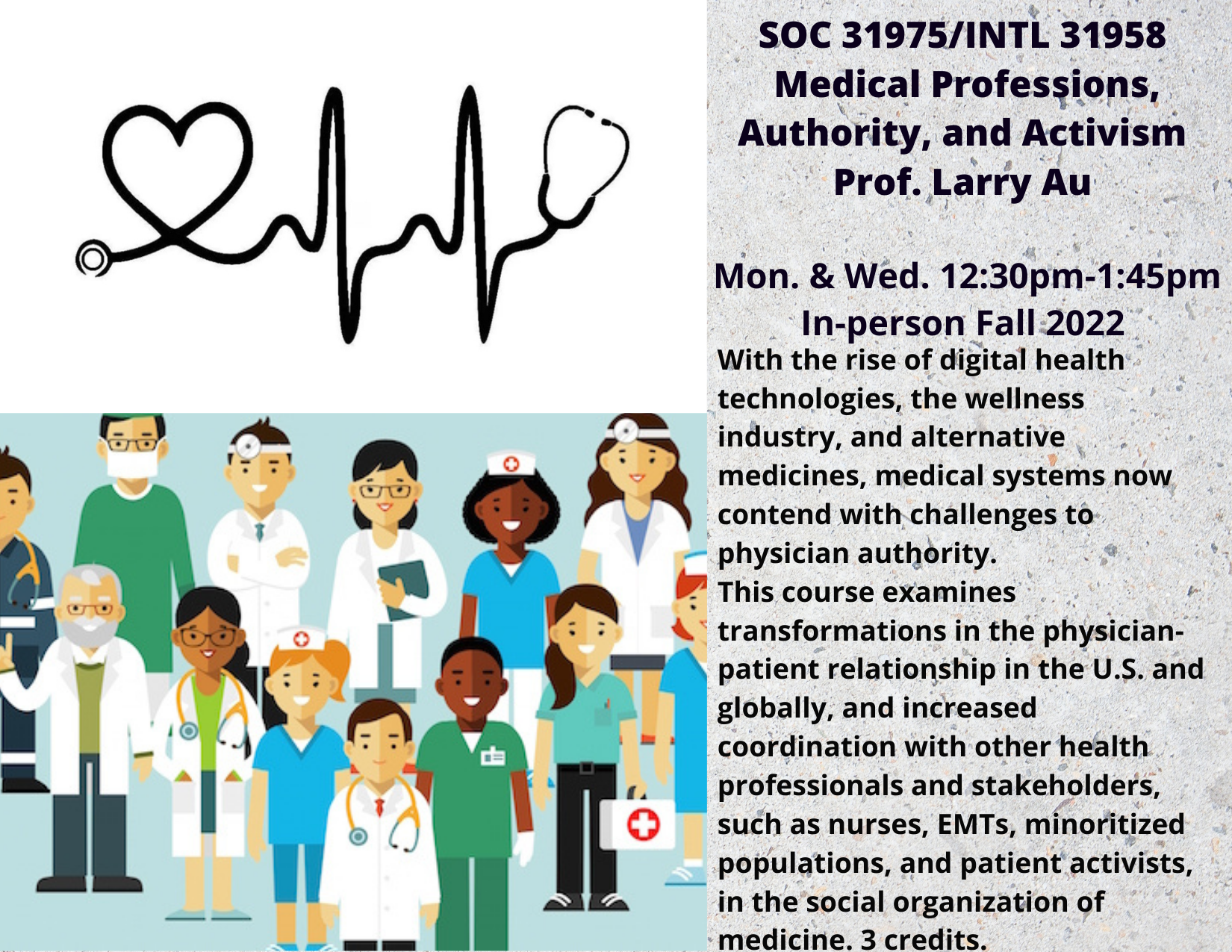 This course explores the causes, patterns and impacts of human migration and social change, including forced migration, displacement and the experiences of refugees. Themes will include: theories of migration; globalization; development and migration; securitization of immigration; human smuggling and trafficking; gender, race and exclusion; transnationalism and diasporas; conflict, the environment and forced migration; and zusterity and mass. 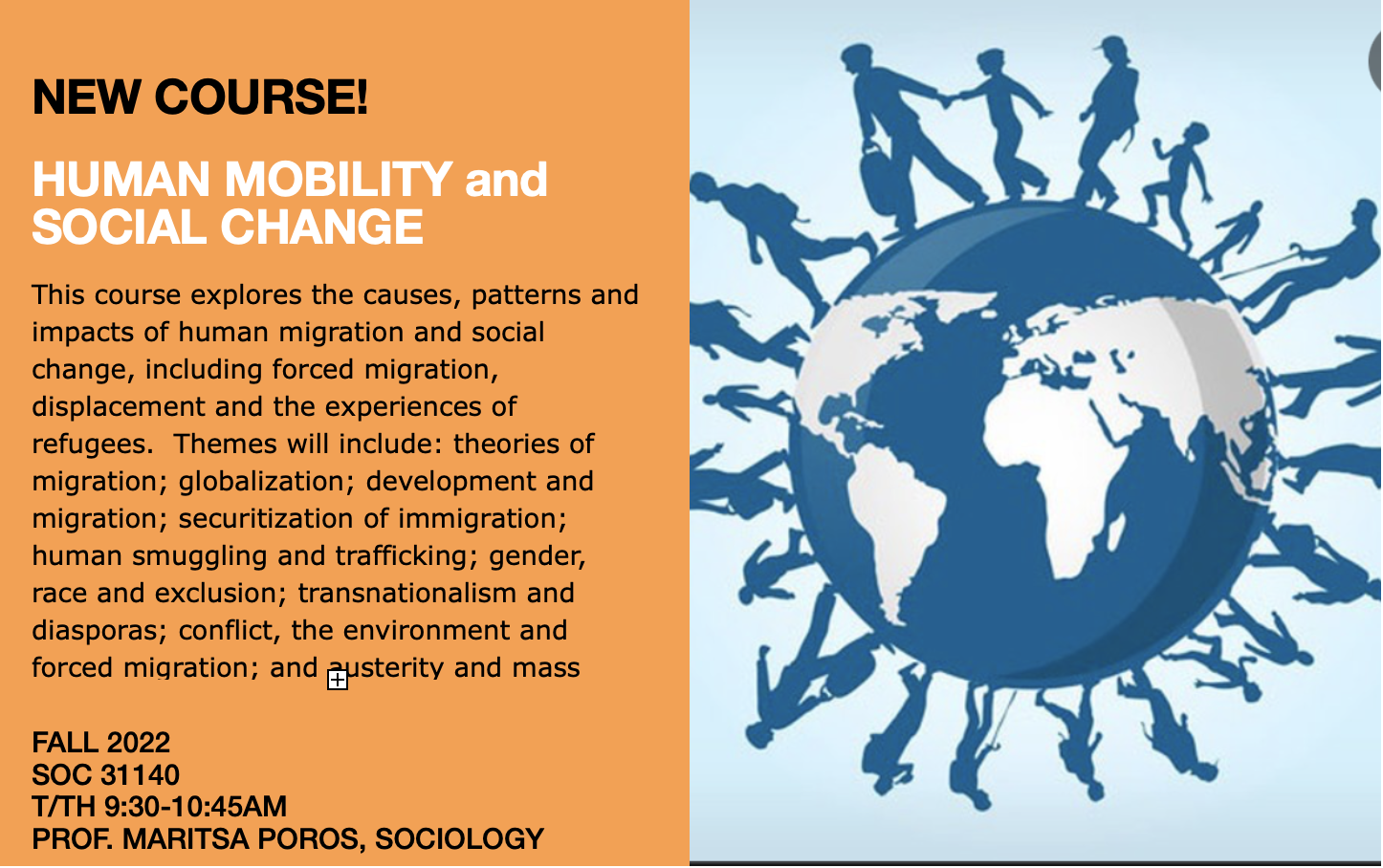 This course will explore the biological basis of sex and sociological understandings of gender, including where the two intersect. The interaction between genes and chromosomes will be explored as well as the social construction of gender and how gendered identities shape everyday life. 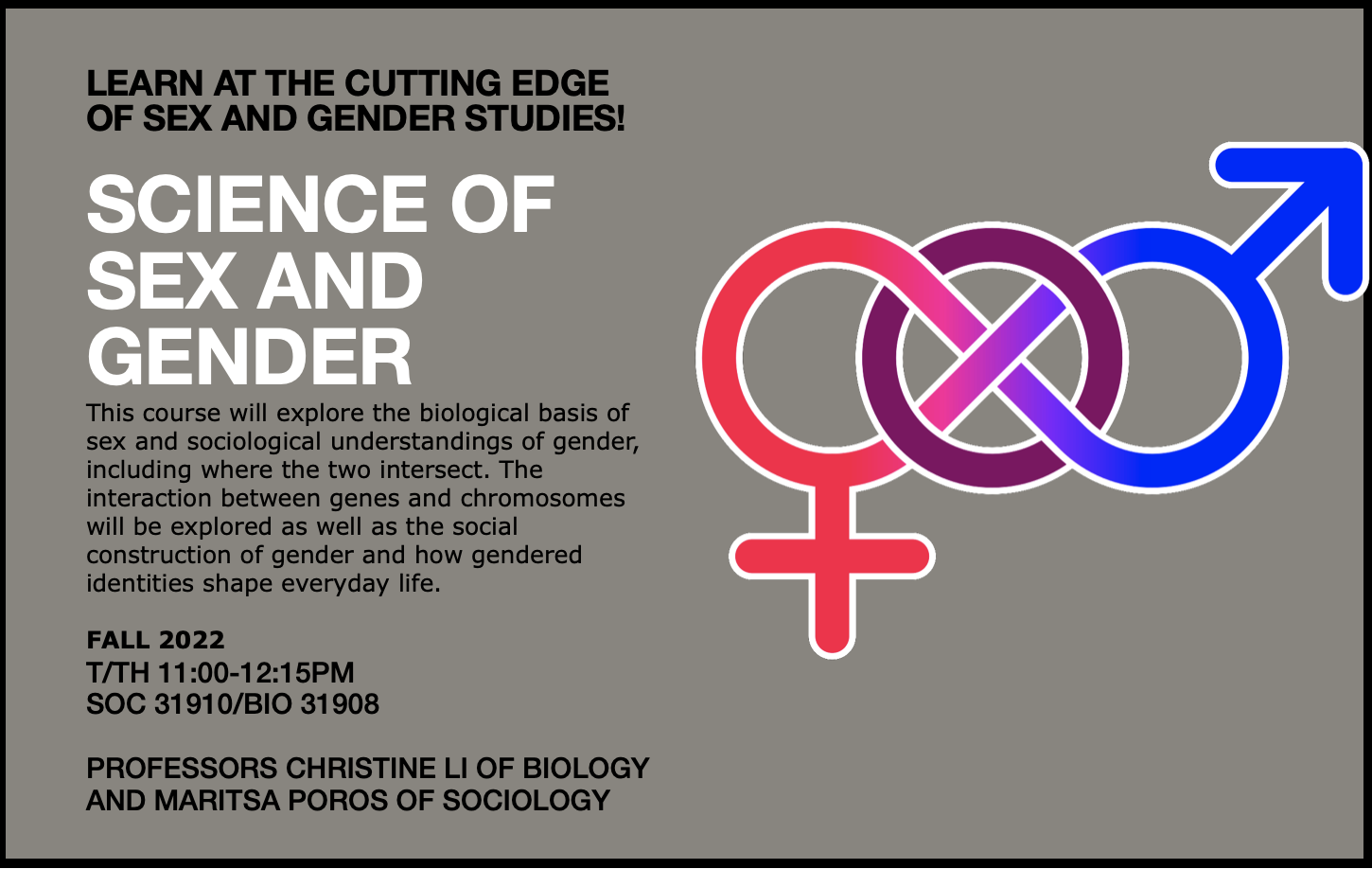